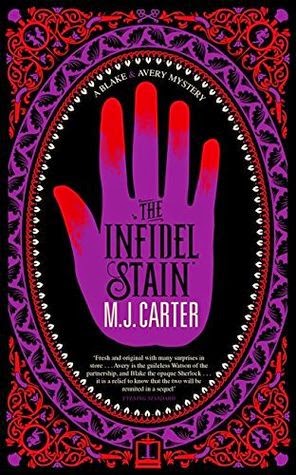 the Infidel Stain by M.J. Carter
Publisher: Figtree Books
Release date: 30 April 2015
Rating: *** and a half
Back cover blurb: It wasn't just blood, it was ink too. There was black ink on his face and more on his chest and fingertips. Not just the usual printer's stain, but like his fingers had been pressed in it... London, 1841. Returned from their adventures in India, Jeremiah Blake and William Avery have both had their difficulties adapting to life in Victorian England. Moreover, time and distance have weakened the close bond between them, forged in the jungles of India. Then a shocking series of murders in the world of London's gutter press forces them back together. The police seem mysteriously unwilling to investigate, and as connections emerge between the murdered men and the growing and unpredictable movement demanding the right to vote for all, Blake and Avery must race against time to find the culprit before he kills again. But what if the murderer is being protected by some of the highest powers in the land?


Jeramiah Blake and William Avery were first introduced to us by M.J. Carter in, the Strangler Vine, a novel where they investigated the whereabouts of a missing poet in India. The Infidel Stain, set in London, sees the pair investigating something altogether more gruesome.

The Infidel Stain opens with the mutilated body of a printer; discovered by a young woman (Matty Horner) seeking refuge from the freezing cold. Aware he sometimes works late in to the night, she senses immediately that something is very wrong as she enters the back of the building housing the printing press.

Avery is summoned to London by Blake. Disturbed by his friends appearance on their first meeting, Avery is convinced his friend is ill or in trouble. Blake is neither and has summoned Avery to assist him. The pair are swiftly hired by Viscount Allington, to investigate the murders of several members of London’s printing press that the newly formed Police are seemingly unable to.

Avery is reluctant and wary at first, but Blake seems to revel in their involvement. It quickly becomes apparent that the deceased are not ordinary printing press they were in fact specialist printers, specialising in what we would call (at our politest) lewd publications.

Avery is clearly uncomfortable amongst the slums of poor Victorian London and the gutter press. Too keen to help those who are too proud to accept his kindness and sometimes too trusting for his own good. Blake on the other hand has an affinity with this part of the Capital and is able to question witnesses and suspects with apparent ease.

They make an unlikely pair, but work well together.  Avery able to extract information from the more well-to-do with his caring manner, and Blake from every else with his shabby appearance and abruptness. The 'Infidel' of the title refers to 'political radicals with atheist and republican beliefs...regarded by the government as dangerous revolutionaries'. There is a definite political theme running through the novel but don't let that put you off. There's not much more I can say - as I don't want to give away too much!

Thank you to the publishers who sent me an advanced copy of the Infidel Stain in exchange for an honest review.