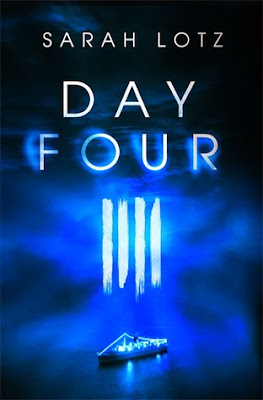 Day Four by Sarah Lotz
Publisher: Hodder
Release date: 21 May 2015
Rating: ****
Back cover blurb: Four planes. Three survivors. One message. It seemed like the end of the world... but it wasn't. This, however, just might be. The trip of their dreams becomes the holiday of their nightmares: DAY FOUR is Sarah Lotz's extraordinary, unmissable follow-up to the book that made headlines around the world, THE THREE - perfect for fans of The Shining Girls, The Passage and Lost. Four days into a five day singles cruise on the Gulf of Mexico, the ageing ship Beautiful Dreamer stops dead in the water. With no electricity and no cellular signals, the passengers and crew have no way to call for help. But everyone is certain that rescue teams will come looking for them soon. All they have to do is wait. That is, until the toilets stop working and the food begins to run out. When the body of a woman is discovered in her cabin the passengers start to panic. There's a murderer on board the Beautiful Dreamer... and maybe something worse.

Day Four is the follow up to one of my favourite thriller/horror novels of last year, the Three. I'm not one that's easily frightened, thankfully I've never suffered with nightmares or such like. However, Lotz's writing is so authentic that even I felt sligtly creeped out by certain events.

Days pass before they admit defeat and send out a tender to try and summon help. Meanwhile the ship is slowly running out of food, the toilets and plumbing are beginning to break down and people are beginning to see things that they shouldn't.

The crew put it down to exhaustation and illness, but Celine Del Ray is determined to convince the passengers that something more sinister is at bay.

With a medium, two suicidal elderly ladies and a delusional murderer all introduced as passengers on board the Beautiful Dreamer before the ship stalls, you know you are in for a bumpy ride. The characters introduced after are equally as disturbing. Without wanting to give any more away, I had better leave it there.

Day Four is claustrophobic, terrifying and brilliant. It will you have you gripped from it's very first pages and leave you wondering if you really need to go on that cruise afterall.....


Day Four is available to buy now from Amazon online and all good shops.

Thank you to Good Reads and Hodder for sending me this novel to review as part of the Good Reads First Reads giveaway programme.