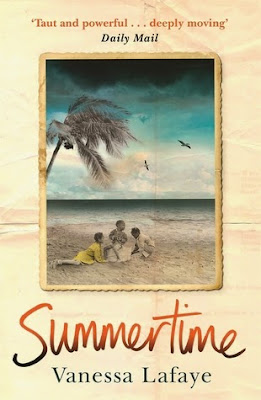 Summertime by Vanessa Lafaye
Publisher: Orion
Release date: 7 May 2015
Rating: *****
Back cover blurb: Florida Keys, 1935. Hurricane Season. Tens of thousands of black and white men scarred by their experiences of war in Europe return home to find themselves abandoned to destitution by the US government. The tiny, segregated community of Heron Key is suddenly overwhelmed by broken, disturbed men with new ideas about racial equality and nothing left to lose. Tensions flare when a black veteran is accused of committing the most heinous crime of all against a white resident’s wife. And not far off the strongest and most intense hurricane America has ever witnessed is gaining force. For fans of The Help and To Kill a Mockingbird, this is the story of the greatest tragedy you've never heard of.


Summertime is Vanessa Lafaye's gorgeous first novel. It is a debut that captures the period in time, and the location of the novel beautifully.

Summertime opens with Missy; Maid to the Kincaid family helping with preparations for the 4th of July barbecue.

Heron Key is a small town, where everyone knows everyone and secrets simply cannot be kept. But almost as soon as we meet her we learn that Missy has a secret that must be kept or she will most certainly lose her job.

Luckily she has Selma on her side, a woman who is desperate for her brother to return home finally and safely from WW1.

Henry Roberts is the apple of Missy's eye, but she hasn't seen him in years. He lives with the WW1 veterans out of Heron Bay in a makeshift camp that is barely fit for inhabitants.

When Roberts turns up to the 4th of July party, Missy doesn't know what to do. Should she tell him how she feels or will he still consider her to be the little girl he left behind before going to War?

The Veterans aren't exactly welcome guests at the party and soon tensions are running as high as the humidity. There is a storm on the way -  and not just in the meterological sense.

When Hilda Kincaid is found beaten nearly to death, suspicion immediately falls on Henry as he was the last person seen to be dancing with her. As the tensions rise and accusations fly, the barometer starts to plummet and the storm grows ever closer.

But nothing can prepare Heron Bay for what is coming. For far out over the Atlantic, the greatest storm ever to hit North America is heading their way...

Brutually honest, refreshingly so at times, Summertime is a debut that you won't want to miss. I can't wait to see what Vanessa Lafaye comes up with next.


Summertime is available to buy now from Orion online and all good book shops.