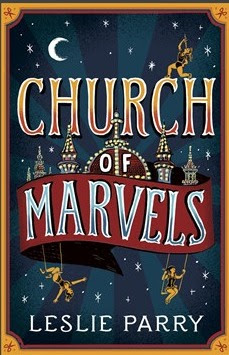 Back cover blurb: New  York, 1895. It's late on a warm city night when Sylvan Threadgill, a young night soiler who cleans out the privies behind the tenement houses, pulls a terrible secret out from the filthy hollows: an abandoned newborn baby. An orphan himself, Sylvan was raised by a kindly Italian family and can't bring himself to leave the baby in the slop. He tucks her into his chest, resolving to find out where she belongs. Odile Church is the girl-on-the-wheel, a second-fiddle act in a show that has long since lost its magic. Odile and her sister Belle were raised in the curtained halls of their mother's spectacular Coney Island sideshow: The Church of Marvels. Belle was always the star-the sword swallower-light, nimble, a true human marvel. But now the sideshow has burnt to the ground, their mother dead in the ashes, and Belle has escaped to the city. Alphie wakes up groggy and confused in Blackwell's Lunatic Asylum contd...

Church of Marvels is a very impressive debut novel and it is particularly exciting for me as a fan of historical fiction to discover a talented new author.

The novel opens in 1895 Coney Island; Odile is missing her twin-sister Isabelle (Belle) who has run off (quite literally) to Manhattan following a fire in the building that housed 'the Church of Marvels' their Mother's spectacular side show.

Odile is working under a new boss, in a new sideshow as the Spinning girl on the Wheel of Death, but she is mourning the loss of her Mother in the fire, and pondering over a letter from Belle. In short, she is not concentrating on her routine. So when she is injured she sees it as a perfect excuse to pack up her things and attempt to find her sister.

When Sylvan, a night soiler, finds an abandoned baby inside one of the privies he is attending to, he is determined to find the child's mother, for he does not believe that she meant to abandon her child, and he is sure that something has happened to make her act in this way.

Alphie upon waking up in lunatic asylum knows something terrible has taken place, something that she can barely remember being a part off. Yet she knows it must have for her to end up there. An encounter will a fellow 'inmate' leaves her reeling, but determined to escape back to normality as she knows she is not insane.

At first you wonder how these characters lives can possibly be linked, but as the novel progresses it becomes much clearer. The descriptions of the less than savoury areas New York/Manhattan and the horrors of the lunatic asylum are vivid, honest and brilliant.

I don't want to give too much more away, as this is most definitely a novel you have to discover for yourself. But I really enjoyed it and I can't wait to see what Leslie Parry has in store next.

Church of Marvels is available from 4 June 2015.
You can pre-order it now from Amazon online.