Review: Death is a welcome guest by Louise Welsh 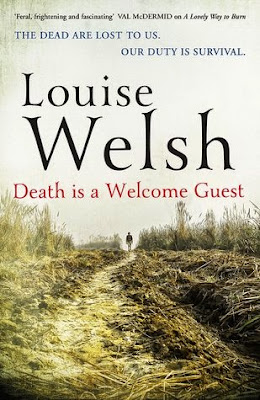 Death is a welcome guest by Louise Welsh
Publisher: John Murray Press
Release date: 4 June 2015
Rating: ****
Back cover blurb: Magnus McFall was a comic on the brink of his big break when the world came to an end. Now, he is a man on the run and there is nothing to laugh about. Thrown into unwilling partnership with an escaped convict, Magnus flees the desolation of London to make the long journey north, clinging to his hope that the sickness has not reached his family on their remote Scottish island. He finds himself in a landscape fraught with danger, fighting for his place in a world ruled by men, like his fellow traveller Jeb - practical men who do not let pain or emotions interfere with getting the job done. This is a world with its own justice, and new rules. Where people, guns and food are currency. Where survival is everything. Death is a Welcome Guest defies you to put it down, and leaves you with questions that linger in the mind long after you read the last page.


Death is a welcome guest is the second novel in Louise Welsh's 'the Plague Times’ trilogy and I have to admit that I enjoyed much more than the first one. I’m not sure if it was because I knew more of what to expect, or whether it just felt more believable. But for me, it certainly felt more ‘real’ than the first novel of the series.

For anyone who hasn’t read the previous novel, ‘the Sweats’ is a global pandemic with no current cure. There are few survivors in quarantine centres but most major towns and cities have been wiped out and those surviving away from the quarantine centres are under curfew from the Military in an attempt to stop the spread of the Sweats.

Magnus McFall is a stand-up comedian struggling to make a living. When he opens for the legendary Johnny Dongo he thinks he has made it. Until he is kicked out of the after party and ends up in jail for a crime that he didn’t commit.

The Sweats doesn’t discriminate between those above or beyond the law, and soon Pentonville is full of the dying, dead and desperate to escape.

When Magnus and his cell mate, Jeb decide to break out, they have no idea of the horror of world beyond the prison gates. The London they both once knew has changed beyond recognition. They decide not to stick around and drive their stolen prison van further north with Magnus’ aim to get back to the Orkney Islands. Jeb is just glad to be free of prison life.

When they are welcomed into a 'community' after being rescued from a life-threatening roadside encounter, the pair are grateful. They don't expect to stick around as Magnus is keen to get up to Orkney. But the community aren't so keen for them to leave and want to make use of their skills.

Desperation kicks in and certain members of the community behave in dangerous and unforgiveable ways. This part of the novel really makes you as a reader question what you would do in a similar situation...

I wasn’t sure what to expect from the ending given the fast pace of the last few chapters, but I absolutely loved it and now can’t wait for the final instalment in the trilogy.


Death is a welcome guest is available from 4 June 2015.
You can pre-order it now from Amazon online and John Murray Press.

Thank you to the publishers who approved my request in an exchange for an honest review.