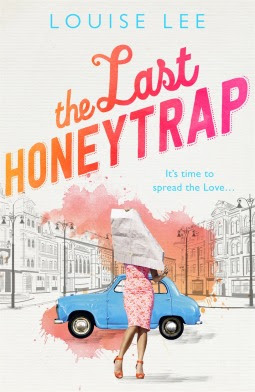 the Last Honeytrap by Louise Lee
Publisher: Headline
Release date: 4 June 2015
Rating: *** and a half
Back cover blurb: He's the man every woman wants. Private Investigator Florence Love is out to get him. Florence has ten days to meet, charm and entrap Scott 'Scat' Delaney. Whilst sticking to THE Cardinal Entrapment Rule: One kiss, with tongues, five seconds - case closed. Scat, a superstar jazz musician, is stunning. He's also a reclusive hypochondriac with a Junta-like entourage - it's going to take a special woman to make him fall into the trap. Florence Love will tell you at length why she's that woman. She's beautiful, resourceful and relentless. A master of body language, evolutionary science and Shorinji Kempo. She'll use every tool in her armoury, especially when it comes to discovering the truth about Bambi, her absent mother - a twenty-five-year-old mystery she's determined to solve... Cardinal Entrapment Rule #2 Never EVER fall for the target (even when they're the hottest man on the planet) That would be very bad form indeed.

Sometimes when you inhabit the dark dark (reading) world of murderers, pyschopaths and sociopaths you just need a little bit of light relief- and that's where the last honeytrap comes in.

Florence Love is a Private Investigator (P.I) specialising in entrapment; luring unsuspecting (and unfaithful) men into compromising positions that they can't argue themselves out of, no matter how much fame or fortune they may have.

Love uses her beauty, brains and relentlessness to entice these men to her and she rarely fails. They are usually quick to succumb, you could they are say putty in her hands.

She loves her job, but an encounter with a foreign government minister leaves her wondering if she shouldn't give it up. Then she begins to recieve evidence that her long deceased Mother may still be alive, so she uses work to distract herself, until she can bear to find out the truth.

Florence's brother, Michael Love is just about the most adorable man in a novel that I've ever met (read). He is so loyal to Florence, but not afraid to voice his opinion. Michael has aspergers and some of his one liners to Florence are just brilliant. Michael doesn't believe as Florence does that their mother is alive, but he adores Florence and is easily influenced by her.

Scott (Scat) Delaney is a global superstar, a renowned Jazz musician with exceptional looks who could have any woman he wanted. He has a secret girlfriend, a relationship that has been kept from the press. He wants to finally go public, but his girlfriend Alice wants to be totally sure before she is thrust into the spotlight, so she hires Florence.

As Florence begins her surveillance on Scat in order to set the 'trap' several things don't add up to her and she wonders if Alice St Croix is who she says she is? But if she isn't then why on earth would she have hired Florence. As Florence's investigation continues she grows ever closer to Scat, aware that she is breaking all the rules of a P.I.

Frankly she is past caring. Convinced that her mother 'Bambi' is out there somewhere, and distracted by a potential stalker, Florence swears that Scat's entrapment will be her last. But will she be able to tear herself away from the sexiest man on the planet?

Only time will tell.... the last honeytrap probably wouldn't be my usual choice of novel, but I'm actually quite looking forward to the next one in the series!

the Last Honeytrap is available from 4 June 2015.
You can pre-order it now from Amazon online and Headline.