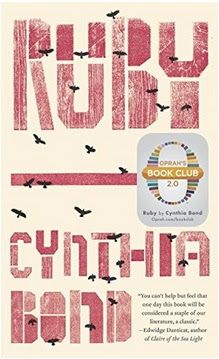 Ruby by Cynthia Bond
Publisher: Two Roads Books
Release date: 10 February 2015
Rating: *** and a half
Back cover blurb: Ephram Jennings has never forgotten the beautiful girl with the long braids running through the piney woods of Liberty, their small East Texas town. Young Ruby Bell, “the kind of pretty it hurt to look at,” has suffered beyond imagining, so as soon as she can, she flees suffocating Liberty for the bright pull of 1950s New York. Ruby quickly winds her way into the ripe center of the city--the darkened piano bars and hidden alleyways of the Village--all the while hoping for a glimpse of the red hair and green eyes of her mother. When a telegram from her cousin forces her to return home, thirty-year-old Ruby finds herself reliving the devastating violence of her girlhood. With the terrifying realization that she might not be strong enough to fight her way back out again, Ruby struggles to survive her memories of the town’s dark past. Meanwhile, Ephram must choose between loyalty to the sister who raised him and the chance for a life with the woman he has loved since he was a boy.


Ruby Bell is a crazy lady, or at least thats what the residents of Liberty, a small East Texas town would have you believe. Ephram Jennings doesn't follow the crowd, which displeases his sister immensely. But Ephram has been in love with Ruby since they were young together.

Ruby sadly is not aware of Ephram's love for her. She has only recently returned to the small religious community of Liberty, from years away in New York. She is not used to the claustrophic atmosphere after so long away and barely speaks a word to anyone.

But there are rumours being spread about Ruby, some very unsavoury rumours. Not that Ephram pays them any attention, once he has finally plucked up the courage to go to Ruby, then there is no turning back. They will face the world together. Whatever that may mean.

For me Ruby is a novel of two halfs, the first had me gripped not wanting to stop reading, but the second left me confused, and wondering if I had gone mad. It's difficult to put in to words without giving away too much of the plot, but I think I just found the latter half of the novel a little overwhelming.

I deliberated for a long while over how many stars to give Ruby, for the first half of the novel was definitely a four star read as Ephram and Ruby are re-discovering each other, but it was sadly (for me at least) let down by the latter half, hence the three and a half star rating.

It is an intriguing novel, of that there is no doubt, but I think it will divide opinion, and for that reason alone I can see why it is a popular choice for book clubs etc.

Don't take my word for it though, give it a go and see what you think!

Ruby is available to buy now from Amazon online and all good book shops.

Thank you to Weekend Reads who sent me a copy of the novel in exchange for an honest review.