Review: the Spider in the corner of the room by Nikki Owen 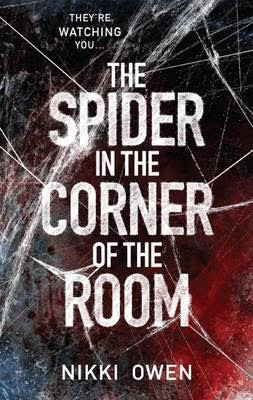 the Spider in the corner of the room by Nikki Owen
Publisher: Mira UK
Release date: 4 June 2015
Rating: *****
Back cover blurb: Plastic surgeon Dr Maria Martinez has Asperger’s. Convicted of killing a Catholic priest, she is alone, in prison and has no memory of the murder. DNA evidence places Maria at the scene of the crime, yet she claims she’s innocent. Then she starts to remember… A strange room. Strange people. Being watched. As Maria gets closer to the truth she is drawn into a web of international intrigue and must fight not only to clear her name but to remain alive.

the Spider in the corner of the room is the first novel in 'the Project Trilogy' series by Nikki Owen and I literally cannot wait for the next one!

Dr. Maria Martinez is a consultant plastic surgeon. She is also a convicted murderer, or so those around her would have her believe. Maria is not so sure. She doesn't think she murdered the priest that everyone is telling her she did, then again she isn't certain that she didn't. She is neither convinced or unconvinced of her own innocence.

This isn't the only thing that Maria is unclear about. Maria suffers with aspergers, making life in prison for her more difficult than most. The novel is written from Maria's point of view, allowing us as readers to really get in to her head and see what she is thinking, feeling etc.

It is not always a particularly pleasant place to be.

Set in three distinctive time periods, Maria's sessions with her 'therapist', her time in prison, and flashbacks to her childhood, the important details are fed to us slowly, like pieces of a puzzle to be put together in the final chapters. As the novel progresses it becomes clear that Maria has been the subject of some cruel and brutal experiments from a young age.

Is this the sole reason for her behaviour? Did she really kill anyone? And what is that spider's web all about? Is there actually a spider in the corner of the room, or is Maria imagining it?

the Spider in the corner of the room is a difficult book to review without giving too much of the plot away, but I can guarantee that you will NOT be able to put it down. It requires a certain amount of concentration, but it is worth every moment that you spend on it.

the Spider in the corner of the room is available to buy now from Amazon online and all good book shops.