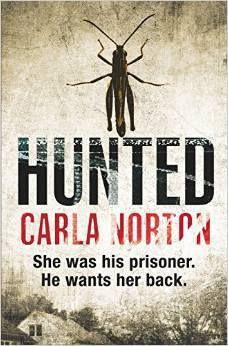 Back cover blurb: 'You live nearby? You need a ride?' She stopped and looked at him: a chubby guy with a beard, younger than her father, but older than a teenager. She could never guess the ages of adults. 'You need some help?' the man asked again. 'I can’t fix your bike, but I can give you a lift. It’s no trouble.' 'Uh, no thanks. I better not.' He looked nice enough, and in all her twelve years she’d never met anyone dangerous or crazy, but she’d been warned many times about strangers... Reeve LeClaire is not a victim. Not any more. It’s been seven years since she escaped from evil psychopath Daryl Wayne Flint. He held her for four of her precious teenage years, and now she’s finally getting her life back. But Flint, imprisoned in a top psychiatric hospital, has been watching and waiting … meticulously planning his getaway. Now his chance has finally come. His escape is Reeve’s worst nightmare, contd...

Hunted opens with Reggie LeClaire’s kidnap, the full events of which are presumably covered in Norton’s previous LeClaire novel; the edge of normal (which I now really want to read incidentally!)

Eleven years later Reeve LeClaire is a determined young woman embarking on a new life far away from her captor Daryl Wayne Flint.
Flint is safely imprisoned in Olshaker psychiatric hospital, Seven years after Reeve escaped his clutches in a road traffic accident. A twist of fate that has never been forgotten by either of them.

Daryl Wayne Flint is a particularly creepy predator, determined to escape the psychiatric unit and get back to doing what he does best – capturing and terrifying young women.

When Daryl Wayne Flint escapes from Olshaker, Reeve is instantly on high alert afraid that he will come looking for her. When the police don’t take her seriously, Reeve turns to the one person she know will understand, Former FBI agent Milo Bender. He knows Flint better than anyone, and knows exactly what Reeve went through previously.

When Reeve contacts him, despite being retired due to ill health he is more than happy to help. He suggests that she go and stay with him for a while in whilst they wait and see what Flint is up to.
Within 24 hours of his escape, Flint has murdered a face from the past, and both LeClaire and Bender fear that it isn't a lone killing. With or without the FBI's help they vow to work together to bring Flint to justice.

But will it be as simple as that, or is Flint harbouring a secret that even the two people who know him best hadn't considered?
Hunted is available to buy now from Amazon online and all good book shops.