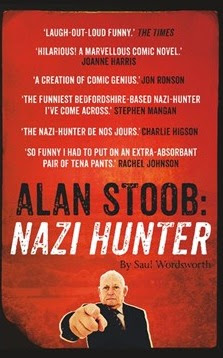 Alan Stoob: Nazi Hunter by Saul Wordsworth
Publisher: Coronet
Release date: 21 May 2015
Rating: *** and a half

Back cover blurb: In 1984, age 57, Alan Stoob is clearing his desk in advance of early retirement from the Bedfordshire Constabulary when Simon Wiesenthal, the world's leading Nazi Hunter, invites him to Vienna and implores him to hunt Nazis in the Luton area. This is a challenge that Alan cannot resist. Subsequent to a tip-off from a mystery informant, Alan is drawn into a Nazi plot involving the coalition government, Prime Minister and even the President of the United States. Alan is fored to go undercover-but will someone discover his true identity?

Alan Stoob is Britain's premier Nazi Hunter. A retired policeman lured reluctantly in to the world of Nazi Hunting by the worlds best; Simon Wiesenthal. But once he has started hunting down the despicable war criminals Alan is not content to rest until he has captured the most notorious of the remaining war criminals.

Alan is a very funny character, the novel is written in the form of a diary, so we can really get in to his head and experience how is he treated by his wife, son and the rest of his (particularly) dysfunctional family.

If you are put off by the novels title thinking it is going to be a dark novel about Nazi's, then don't be. Sure there is a little bit of black humour, but mainly it is just very very funny.

Alan is the kind of grandfather I always wanted! And I'm sure lots of people reading will feel the same. His love for wife, and his hatred of the Nazi's make him a very real character, something that is not always found in a comedy novel.

Alan Stoob: Nazi Hunter is a world away from the novels that I usually frequent but I would not hesitate to read another in the series - if there is to be one...

Alan Stoob: Nazi Hunter is available to buy now from Amazon online and all good shops.