Review: the Truth According to Us by Annie Barrows 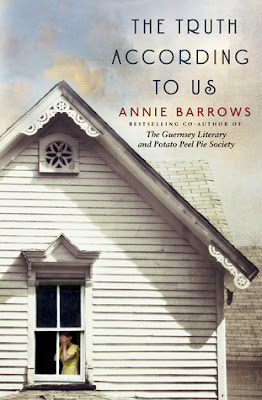 the Truth According to Us by Annie Barrows
Publisher: Random House UK/ Transworld
Release date: 2 July 2015
Rating: *** and a half

Back cover blurb: There are small towns in America that never seem to change, places where time holds still, and where nothing has or will – ever - happen. This is a lie. Summer, 1938: the small town of Macedonia, West Virginia, is celebrating its 150th anniversary, to be commemorated with parades, picnics, and most importantly, a book recounting its history. Its reluctant author, the debutante Miss Layla Beck, recently disinherited by her father, arrives in town with one goal – to get out of it as quickly as possible. Macedonia’s history seems simple enough - brief and uneventful. Then Layla meets the Romeyns: Jottie, Willa, Felix, Emmett, a family at once entertaining, eccentric, seductive, and inextricably bound up in Macedonia’s most well-kept historical secret – a secret yet to be told.


The Truth According To Us is a novel that has had me intrigued and wanting to read the novel for quite some time now.

Set in the fictional Macedonia, West Virginia in 1938. It is told from three main viewpoints; Willa Romeyn, Josephine Romeyn (Willa’s aunt) (Jottie) and Layla Beck a young writer from a wealthy family who is staying with the Romeyn’s whilst writing about the history of Macedonia for the Federal Writers' Project.

The Federal Writer's Project is assigned to Layla by her uncle, after her US senator Father tries to force Layla in to a marriage that she does not care for. Instead she finds herself as a writer in the small town of Macedonia, West Virginia, a world away from her rich and privileged upbringing in Washington.

Layla wants to tell the true story of the town, the residents perhaps unsurprisingly are not too sure about a stranger writing about their towns history. But Layla has an unexpected ally in the form of twelve year old Willa, a young girl who is interested to know what secrets the town she lives in might be harbouring.

But as is so often the case, once you start digging in to the past, there is always a chance that you might discover something that you don't want to.  Without giving too much away, I suppose all I can say is that some secrets are buried for a reason, and often its the families that inhabit the town and not the town itself that have something to hide.

The Truth According To Us is a beautifully written novel that really has you believing that you are there in that summer investigating Macedonia's history with Layla Beck.

The Truth According To Us is available to buy now from Amazon online and all good book shops.