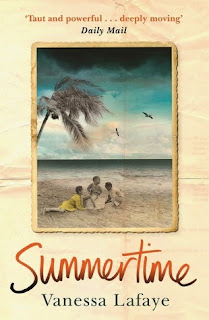 Today I am delighted to welcome Vanessa LaFaye to my blog, author of 'Summertime' the latest Richard and Judy's Summer Book Club choice.

We assume that successful writers, and especially icons like Harper Lee, have it all worked out and simply go from one mega-success to the next, so it makes me feel a little better to know that icons struggle too, and to see that their path was crooked too.


During the week of the release of Lee’s much anticipated ‘Go Set a Watchman’, I’ve been thinking a lot about Second Novel Syndrome. It haunts every debut author. If your first book has been well-received, as Lee said, ‘The only way is down.’ It’s a major preoccupation for the Prime Writers, the collaborative group of debut novelists to which I belong www.theprimewriters.com . I took a sardonic look at it here.

Lee’s situation is more unusual than most. Her second book was published first, and now the book first written will be published 55 years after the second. Confused? Imagine what it must be like for the author, after all this time. Because, for the author, each book is time-stamped. It is a snapshot of their ideas, skills, and fixations from a very specific period in their life. It’s a glimpse of the person they were, and the writer they were, at a moment in time. Shuffle them around and you lose the natural order. This happens sometimes when a successful ‘breakthrough book’ is followed swiftly by the author’s unpublished back catalogue. I can remember what was happening to me at each stage of the writing of ‘Summertime’—where I sat, what was going on in my life. For me, the book is forever fixed in 2010-12.

Sequels are as old as the Bible, prequels not so much. (George Lucas has a lot to answer for there). In Lee’s case, it seems that the world is on course for the biggest literary disappointment in history—both in terms of the demolition of Atticus Finch, one of the most beloved fictional characters of all time, and in terms of the quality of the book itself. I have not read GSAW, and I’m not sure yet if I will. But are we right to be disappointed? Perhaps we are looking at it in the wrong way. The book gives us a fascinating view into the writing process. Rarely do we get to read the manuscript that every writer keeps in the bottom drawer, the one that got rejected but we still harbour hopes for—much less one belonging to a literary icon. Perhaps GSAW should be seen more as an historical document than a work of fiction?

As a species, we are ambivalent towards sequels (and their mutant siblings, prequels). If something succeeds in popular culture, media companies perceive this as a demand for more of the same, despite the immutable truth that the sequels are almost always inferior to the original. Gardeners know that most seeds collected from their plants will not grow true. When those huge film franchises limp on through versions 5, 6, 7—long after the audience’s appetite has been sated—it can even taint the memory of the original. There are some exceptions, of course, like the Harry Potter stories, but it is a fairly safe generalisation to say that sequels tend to disappoint.

A lot of readers have requested that I write a sequel to ‘Summertime’. There is a natural desire to know ‘what happens next’. I have resisted this for the reasons above. In addition, the 1940s and beyond are already very well-trammelled by lots of excellent authors. And, in my opinion, there are some questions that should remain unanswered, some ends left untied. Readers should be allowed to imagine what happens in the future to my characters Henry, Missy and the others.

I have chosen a new story for book 2, also inspired by real events. It does have links to the story depicted in ‘Summertime’, with glimpses of things which happened both before and after. It is neither a prequel nor a sequel but has elements of both. And as it unfolds, and I sit in the same flowery armchair where I wrote ‘Summertime’, it will be time-stamped 2015.

They say that one can never go back. I’m not so sure that I agree. I find it fascinating to ‘reverse-engineer’ characters, to see their personalities take shape on the way to becoming the people who we already know. I think there may be just as much risk for an author in going forward. Are we better off knowing how Atticus turned out? It will take some time to answer that question.