Review: the Bones Of You by Debbie Howells 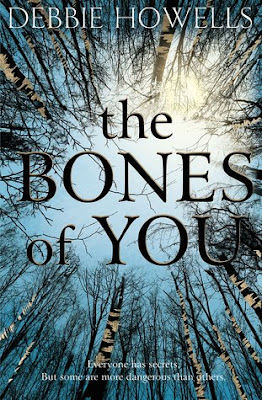 Back cover blurb: I have a gardener's inherent belief in the natural order of things. Soft-petalled flowers that go to seed. The resolute passage of the seasons. Swallows that fly thousands of miles to follow the eternal summer. Children who don't die before their parents. A community in shock. When eighteen-year-old Rosie Anderson disappears, the idyllic village where she lived will never be the same again. Local gardener Kate is struck with guilt. She'd come to know Rosie well, and thought she understood her - perhaps better even than Rosie's own mother. A family torn apart. Rosie was beautiful, kind and gentle. She came from a loving family and she had her whole life ahead of her. Who could possibly want to harm her? And why? A keeper of secrets. Kate is convinced the police are missing something. She's certain that someone in the village knows more than they're letting on. As the investigation deepens, so does Kate's obsession with solving the mystery of what happened to Rosie.
The Bones of You is Debbie Howells’ thrilling debut novel. An idyllic community is in turmoil when Eighteen year old Rosie Anderson goes missing. Rosie is a beautiful young girl, quiet and shy with a loving family, her disappearance is completely out of character.

Kate is Grace’s Mother, although they are the same age and attend the same school, Grace is barely friends with Rosie but unsurprisingly disturbed when she goes missing. Kate is close to Rosie, through her love of horses and she instinctively feels that something terrible has happened to her. She reaches out to her Mother Joanna, to see if she can help.

Joanna Anderson, Rosie’s mother is fraught with grief and lashes out at those close to her, with the exception of her other daughter Delphine, whom she largely ignores, and her husband Neal.

Neal Anderson is a highly respected journalist whom Joanna describes as ‘amazing’ man, but he has a different side to him that we see mainly through Rosie.

Rosie Anderson is perhaps the most important character in the novel, through her we get to see different sides to different people, particularly her Mother and Father.

Alex is Rosie's secret boyfriend, did he have something to do with her disappearance, or is everyone just suspicious because Rosie wasn't the sort of girl to have a 'secret boyfriend' and therefore logically he must be flawed?

There were so many times during the Bones of You where I thought I had it sussed, particularly as an avid reader of this sort of novel. But I was wrong, so wrong, the author does a remarkable job of drip feeding the reader just enough information to come to a conclusion, before introducing something that destroys that conclusion.

If you are looking for a dark psychological thriller that will make you really think then this is the novel for you. I am struggling to describe just how much I enjoyed it, but it certainly is one of my favourite debut novels this year.


the Bones of You is available TODAY from Pan Macmillan and all good book shops.

Thank you to the publishers who sent me an advanced proof copy of the novel in exchange for an honest review.