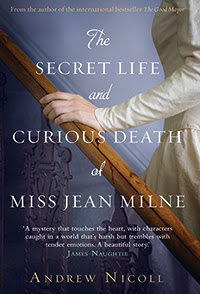 The Secret Life and Curious Death of Miss Jean Milne by Andrew Nicoll.
Publisher: Black and White Publishing
Release date: 15 July 2015
Rating:
Back cover blurb: A wealthy spinster living alone in a crumbling Victorian mansion, Miss Milne appears to be the very model of respectability. But when startled locals find her brutally murdered in her home, the public façade that Jean has hidden behind for so long slowly falls apart. As detectives delve further into the case and piece together the events in Miss Milne’s life that have led up to her horrific murder, Jean Milne’s secret life becomes exposed in a shocking twist. Andrew Nicoll has brought the historical case back from the dead, using newly-released evidence from police files, eye-witness testimony hidden for a century and long forgotten newspaper reports on the Victorian crime. Blurring fact and fiction, reality and mystery, this book resurrects the most shocking incident that took place in the author’s very own sleepy village....


Today I am reviewing The Secret Life and Curious Death of Miss Jean Milne as part of it's wonderful blog tour.

The Secret Life and Curious Death of Miss Jean Milne is a murder mystery novel with a difference. Based on an real life unsolved murder in Broughty Ferry (now Dundee) in 1912.

Miss Jean Mile is found brutally murdered after the postman alerts the authorities as he can no longer get any letters in the letter box. He knows she has not just 'gone away' as she always lets the locals know when she is away.

Miss Jean Mile was a wealthy lady, with no family to speak of, so it seems there is a clear motive for her murder, but no prime suspect. The deceased was dead was at least two weeks before her battered body was found, and despite Broughty Ferry's small size, there are no witnesses to the crime.

The local detectives search for Miss Jean Milne's murderer takes them the length and breadth of the country, checking out acquaintances of both Miss Jean Milne and some other local ladies. As they delve deeper in to her life, they find that Miss Jean Milne was perhaps not the lonely old spinster that everyone perceived her to be.

As the detectives draw closer to their conclusion there is is one final shocking twist in the story, making the ending of the novel is surprising, yet satisfying ...

I'm now off to research the case myself to compare notes with Andrew Nicoll. 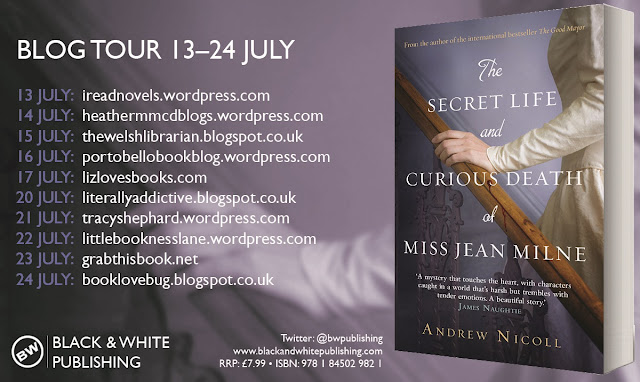 The Secret Life and Curious Death of Jean Milne is available to buy now from Black and White publishing and all good book shops.