Review: Under Ground by S.L. Grey 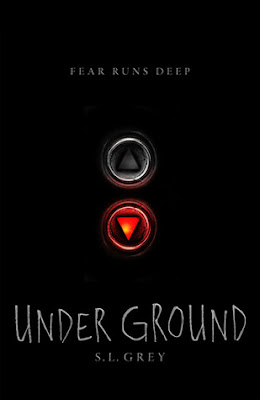 Under Ground by S.L. Grey
Publisher: Pan Macmillan
Release date: 16 July 2015
Rating: **** and a half
Back cover blurb: THEY'RE TRAPPED FIFTY FEET DOWN . . . AND SOMEONE WANTS THEM SIX FEET UNDER. The Sanctum is a luxurious, self-sustaining survival condominium situated underground in rural Maine. It's a plush bolt-hole for the rich and paranoid - a place where they can wait out the apocalypse in style. When a devastating super-flu virus hits the States, several families race to reach The Sanctum. All have their own motivations for entering. All are hiding secrets. But when the door locks and someone dies, they realize the greatest threat to their survival may not be above ground - it may already be inside . . .

Under Ground is the first of Sarah Lotz and Louis Greenberg's collaborative efforts that I have read, and it sure won't be the last.

The Sanctum is a luxurious self-sustaining survival condominium situated underground in rural Maine, set back away from main roads, it is designed to be hidden away from the world at large.

When a super-flu virus hits the United States those families that have bought in to the Sanctum quickly make their way to guaranteed safety. But the Sanctum is barely finished; the elevator doesn't work, there is no wi-fi connection, and the 'state of the art' medical centre has no employees, let alone any usable equipment.

Greg Fuller, owner of the Sanctum is extremely apologetic about the 'teething glitches' of the property, but he assures his patrons that they are now safe from the outside world and don't need to worry.

Unfortunately Greg is the one that needs to worry, when he is seemingly murdered in the middle of the night but one of the Sanctum's occupants, the families begin to point fingers at each other. Will, Greg's right hand man is thrust reluctantly in to the spotlight and left in charge of the Sanctum, but his job becomes increasingly difficult as the days go on.

Things begin to go wrong inside the Sanctum, and I'm not just talking about it's residents relationships with each other...

As the Virus outside begins to subside, the Sanctum seems like less of an attractive option for it's residents, but something or someone is preventing them from leaving alive...

Without giving too much away I really enjoyed my first S.L. Grey novel and I was all set to give Under Ground 5 stars but I was left slightly shocked and quite confused at the ending, so I knocked off half! But don't take my word for it, go and check it out for yourself.


Under Ground is available from 16 July 2015.
You can pre-order it now from Pan Macmillan or Amazon online.