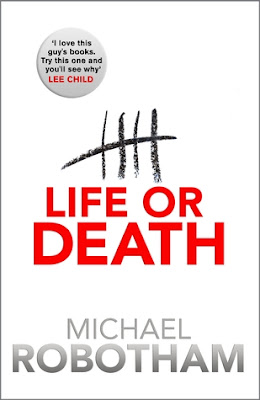 Back cover blurb: Why would a man escape from prison the day before he's due to be released? Audie Palmer has spent a decade in prison for an armed robbery in which four people died, including two of the gang. Seven million dollars has never been recovered and everybody believes that Audie knows where the moneyis.  For ten years he has been beaten, stabbed, throttled and threatened almost daily by prison guards, inmates and criminal gangs, who all want to answer this same question, but suddenly Audie vanishes, the day before he's due to be released. Everybody wants to find Audie, but he's not running. Instead he's trying to save a life . . . and not just his own.

Life or Death is the first Michael Robotham novel I've read, and I'm not entirely sure how this is possible given my love for his chosen genre...

Audie Palmer has one day left to serve on a sentence for Armed Robbery, a crime which he has always insisted he didn't commit, when he escapes from the prison that has held him for the last decade. But if Audie is an innocent as he insists, why would he escape prison with just one day of his sentence remaining?

It is a question that stumps his best friend in prison, a man who has looked after him on the inside, and who thought that Audie would confide in him when making a huge decision such as breaking out of jail! The guards at the prison agree and don't believe him when he says he knew nothing of Audie's plan to escape.

Meanwhile Audie is on the look out for someone, someone close to him who he hasn't seen in the ten years he's been incarcerated. He knows that his plans are dangerous but he can see no alternative.

With lots of surprising twists and turns Life or Death is a novel that will keep your gripped through out. Audie is a complex character who you instinctively know is a good man, whether he committed the crime he was found guilty of or not.

Life or Death I'm pretty sure is the only crime novel with an ending that has reduced me to tears, it is beautiful, fitting and the perfect end to a pretty near perfect novel.

Life or Death is available from 16 July 2015.
You can pre-order it now from Sphere and Amazon online.