Review: Nothing but trouble by Matt Cain 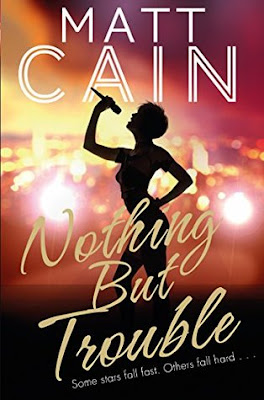 Back cover blurb: Lola Grant is the hottest pop star in Britain and she's about to go global. But behind the music, her addiction to bad boys is taking her personal life in a dangerous direction. When it comes to men, Lola just can't stay away from trouble - and her self-control is pushed to the limit when she meets her handsome new drummer Jake Hunter. Looking out for Lola is her best friend and manager Harvey Sparks. But Harvey's fighting his own demons and can only watch from the sidelines as the star he helped create begins to fall. When Lola seeks comfort in a life of wild partying, she meets good-hearted showbiz reporter Freddy Jones, a man who may just be able to offer her a way out. But as she starts rehearsals for her Trouble tour, Lola finds herself faced with an even bigger threat. And unless someone can get through to her before opening night, she's in danger of losing everything she fought so hard for - in full view of the whole world.


As a book blogger, I love nothing better than to read a book out of my usual 'comfort' zone and absolutely love it! Nothing But Trouble by Matt Cain completely blew me away. It has strong characters, a brilliant and thrilling plot, and a strong message about drugs and alcohol abuse to boot.

Lola Grant is Britain's hottest pop star with her sights on the U.S. Everyone surrounding her is constantly telling her how fabulous she is, but with the troubled upbringing she had, Lola has a hard time believing in herself.

At the launch party for her spectacular second album Lola meets Freddy Jones. Although Freddy is a showbiz reporter, he is a good guy, and he clearly adores Lola, and doesn't have a bad word to say about her - which doesn't do him any favours with his boss who wants him to dish the dirt on Lola!

I am a little bit (okay, quite a lot) in love with Freddy Jones.  Not only is he Welsh (although this is obviously a bonus), he is such a caring, dependable, thoroughly lovely bloke that you actually wish he was real.

Harvey, Lola's manager trusts Freddy Jones, at least more than he would most journalists... He thinks that Lola and Freddy would make the ultimate showbiz couple, but when the rehearsals start for Lola's forthcoming tour, the arrival of her new drummer, Jake, puts a stop to any plans he had for Lola.

Although Lola's single would suggest that she has given up 'Tramps' (men who sleep around) when she sets eyes on Jake, her common sense goes out of the window, the moment she starts to think he might be different, is the moment she pushes the self destruct button.

Harvey and the rest of Lola's entourage are split between encouraging Lola to 'go for' Jake, and advising her to steer well clear. As the start of the tour draws near, it is clear that Lola is in danger of losing everything she has worked so hard for. Can anyone bring her back from the brink? Or is it all over before it really got started?

Nothing But Trouble is available to buy now from Amazon online and all good shops.