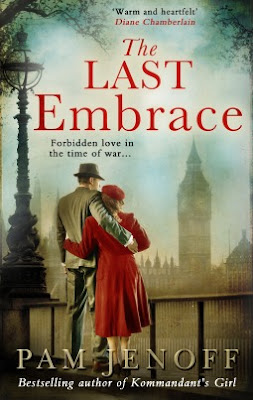 Back cover blurb: August 1940 and 16-year-old refugee Addie escapes Fascist Italy to live with her aunt and uncle in Atlantic City. As WW2 breaks, she finds acceptance and love with Charlie Connelly and his family. But war changes everything: secrets and passions abound, and when one brother’s destructive choices lead to the tragic death of another, the Connelly family is decimated, and Addie along with them.Now 18, she flees, first to Washington and then to war-torn London where she is swept up with life as a correspondent. But when Charlie, now a paratrooper, re-appears, Addie discovers that the past is impossible to outrun. Now she must make one last desperate attempt to find within herself the answers that will lead the way home.

The Last Embrace is the first of Pam Jenoff's novels that I have had the pleasure of reading, and it certainly won't be the last! Historical fiction at it's best, the Last Embrace is a beautiful novel about family, love, loss and above all the brutality of war.

Adelia Montforte is just Sixteen years old when she is forced to flee Italy to live with her Aunt and Uncle in Atlantic City, leaving her Mother and Father behind, and never really understanding why she must leave. After a miserable journey where she suffers from terrible seasickness Adelia just wants to go home.

Luckily her Aunt and Uncle are on hand to make Adelia feel as welcome as possible, but there's no getting away from the fact that Adelia is homesick. The last thing on Adelia's mind is making friends but when the family next door arrive for their summer vacation, Adelia is immediately drawn into their friendly, loving family.

Even better, they are from the same area back 'home' where Adelia will be moving with her Aunt and Uncle before she starts at the local High School in the autumn term. But the Connelly family live very different lives to Adelia's, and Addie as she becomes affectionately known by the family doesn't yet understand the implications of being Jewish.

Addie is quite a naive character in parts (I suppose this could be due to her age), but I never feel that she fully understands why she was sent away from Italy to the US where it was ultimately much safer for her to be. I have a feeling though, that she would not have been alone, and many 'growing up' in that era would have felt the same.

The Last Embrace is a wonderful novel, without giving too much away, it is essentially Addie's coming of age story. The Addie we meet at the end of the novel is a world apart from the Addie we meet at the beginning. Is she a better person? Well you will have to read for yourself to find out, I promise you won't be disappointed.

The Last Embrace is available from 13 August 2015.
You can pre-order it now from Amazon online.