Review: the Other Me by Saskia Sarginson 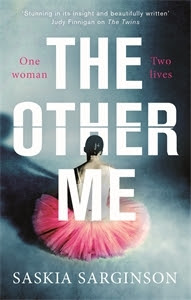 The Other Me by Saskia Sarginson
Publisher: Piatkus, Little Brown UK
Release date: 13 August 2015
Rating: *****
Back cover blurb: Eliza Bennett has the life she's always dreamed of. She's who she wants to be, and she's with the man she loves. But Eliza is living a lie. Her real name is Klaudia Meyer. And Klaudia is on the run. She's escaping her old life, and a terrible secret buried at the heart of her family. This is the story of Eliza and Klaudia - one girl, two lives and a lie they cannot hide from.

When Klaudia Meyer starts secondary school, she is desperate to fit in, until this point in her life she has been home schooled and had little interaction with other children of her age. She quickly becomes friends with the most popular girl in her class and is delighted to be able to invite her over to ‘play’.

When her friend discovers that Klaudia’s father is the school caretaker, a man who the other students have dubbed a Nazi she quickly drops Klaudia like a tonne of bricks. The school bully is quick to step in and fill the void and sets about making Klaudia’s life hell.

Klaudia is curious about her father’s past as she has always wondered how her Welsh Mother and German Father came to be together. What she uncovers leaves her shocked, but largely unsurprised as she has never felt particularly close to her Father. He has never talked of his actions in the Second World War and now Klaudia realises why.

Unsurprisingly by the time she gets to University in Leeds, Klaudia is keen to reinvent herself and leave her troubles behind her.

In Leeds she becomes Eliza Bennet, a popular girl, who loves to dance and gives up her degree to focus on dance classes. With her best friend Meg and her boyfriend Cosmos, Eliza is having the time of her life.

A family tragedy forces her to return home as Klaudia, leaving her university life and friends behind her. Reluctant to go back to Leeds and leave her family behind, she tells them that she has deferred her course for a year.

As she finds herself a job and settles back in to life as Klaudia she is faced with a dilemma. Cosmos her boyfriend from University is back in London and desperate to see her. He doesn’t understand why she is being so distant with him. Klaudia is afraid that if she tells him the truth he will never forgive her.

During the course of the novel, we also hear from Klaudia’s uncle Ernst. His tales of growing up in Germany prior to the second world war with Otto, Klaudia’s father goes a long way to help explain why Klaudia’s father is the man that he is.

Without giving too much away, the Other Me is a beautifully written novel, laced with tragedy. Ultimately Klaudia is who she is because of past events, and the final chapters of the novel tie everything together brilliantly.

the Other Me by Saskia Sarginson is available from 13 August 2015.
You can pre-order it now from Amazon online.