Review: Secrets of the Last Nazi by Iain King 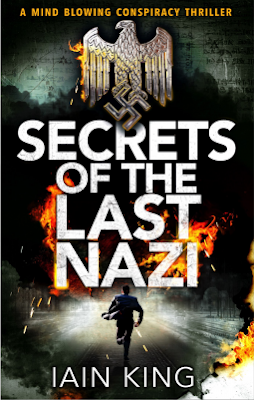 Secrets of the Last Nazi by Iain King
Publisher: Bookouture
Release date: 9 July 2015
Rating: **** and a half
Back cover blurb: THE GREATEST DISCOVERY OF THE 20TH CENTURY. KEPT SECRET. UNTIL NOW. Berlin, 2015 – a well-connected SS Commander is found dead, having protected the last secret of the Nazi empire for seventy years. A discovery by Nazi Scientists so potent it could change the balance of world power – forever. Led by misfit military historian Myles Munro, an international team begin to piece together the complex puzzle left by SS Captain Werner Stolz. As their hunt across Europe gathers pace, the brutal killing of one of the group signals that they are not the only ones chasing the answer. Plunged into a world of international espionage, Myles only has his intellect and instincts to keep him alive. As the team edge closer to an explosive truth, it becomes clear to him that there is a traitor amongst them. Who can Myles trust? And can he unravel the clues of the past in time to save the future?

They say you should never judge a book by its cover, but sometimes we just can't help ourselves. It's human nature. In the case of Secrets of the Last Nazi I'm glad I went with my instincts. It's a book I have been coveting for a while, so when Bookouture announced via Twitter that it was up on netgalley, I'm pretty sure I was one of the first in the queue!

Iain King is an author I've not had the pleasure of reading before, but I am already looking forward to the next installment in the Myles Monro series.

Myles Munro is a military historian and university lecturer, he is exceptionally intelligent and quite brilliant! We first meet him chasing a burglar out of the Imperial War Museum in London, determined to claim back the museums lost exhibits/archived material.

Unfortunately Myles lands up in hospital nursing a damaged knee, but his determination and intelligence has won him an admirer who needs his help. Myles reluctantly agrees to join an international team of representatives put together to join up the pieces of a puzzle left behind by SS Captain Werner Stolz; the keeper of the last Nazi secret.

As they begin their journey it is clear that they are not the only ones concerned about Stolz's past and what he has been hiding for more than 70 years. As the group race across Europe to discover the truth, things begin to happen that no one can explain. Is there a traitor amongst them, or is someone out to cease their mission?

Secrets of the Last Nazi is available to buy now from Amazon online and Bookouture.

Thank you to the publishers who approved my request via netgalley in exchange for an honest review.
Email ThisBlogThis!Share to TwitterShare to FacebookShare to Pinterest