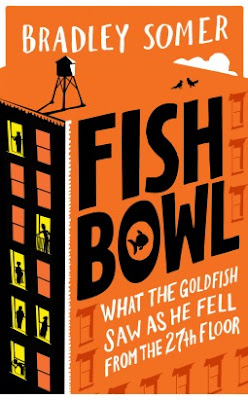 Fishbowl by Bradley Somer
Publisher: Ebury publishing
Release date: 06 August 2015
Rating: ****
Back cover blurb: Even a goldfish can dream of adventure…  From his enviable view from a balcony on the 27th floor of an apartment block, Ian the Goldfish has frequent – if fleeting – desires for a more exciting life. Until one day, a series of unfortunate events gives him an opportunity to escape… Our story begins, however, with the human inhabitants of Ian’s building. There is the handsome student, his girlfriend, and his mistress; an agoraphobic sex worker, the invisible caretaker; the pregnant woman on bed rest; and the home-schooled boy, Herman, who thinks he can travel through time. And as Ian tumbles perilously downwards, he will witness all their lives, loves, triumphs and disasters…  A truly original, philosophically joyful and charming novel with the unlikeliest of heroes. This is Tales of the City as seen by a goldfish.


Fishbowl is a refreshingly quirky debut that is sure to be a big hit this summer!

Fishbowl is a book that really stands out as something different that I've read this year. It is ultimately the story of Ian the goldfish, as he falls from the 27th floor of the Seville on Roxy apartment block.

For me, it is a very clever novel, about how we all really live our life’s in a goldfish bowl under the scrutiny of others.

As Ian the goldfish tumbles from the 27th floor, he sees the sky above him, the pavement below him and a snapshot of each apartment and its occupants on his way down.

Fishbowl is told from a number of different perspectives (the occupants of the apartments of the Seville on Roxy) each with an individually titled chapter.

I don't want to give too much away that might detract from your enjoyment upon reading Fishbowl, but I will say this - be sure to read those titles are they are a brilliant insight into the chapter that follows.

If you are looking for something a little ‘different’ to read this summer (although I can recommend it for anytime..) then Fishbowl is definitely the novel for you.

Funny, quirky, heart-warming and at times a little sad, Fishbowl is a novel that will touch every reader in a different way - and maybe make you want to go out and buy a goldfish.


Fishbowl is released TODAY and is available from Amazon online and all good book shops.

Don't forget to check out the other stops on the Fishbowl blog tour!

Thank you to the publishers who sent me an advance copy of Fishbowl in exchange for an honest review.