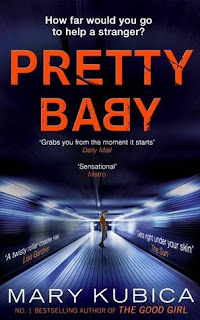 Today I am hosting the wonderful Mary Kubica on my blog as part of the Pretty Baby blog tour. Here she talks about her inspiration.

You can read my review of Pretty Baby here.


Authors are often asked about their inspiration behind a novel. I’d like to say that there is some insightful moment in my writing process when I’m struck with a flare of ingenuity and inventiveness that leads to my books, but such is not the case. For me, it’s usually the result of an overactive imagination and a wandering mind, and often begins with the smallest inkling of what a story could be – either that or the ideas are coerced into my head by some imminent deadline. In the case of THE GOOD GIRL, it was the idea of an atypical kidnapping that first captured my mind. With PRETTY BABY, it was the image of a young, homeless girl with a baby, though I didn’t know who she was at the time or what her story would be. When I sold THE GOOD GIRL to MIRA Books, I signed a two-book contract, which both excited and terrified me. It excited me because this was a once in a lifetime opportunity to launch a career as an author, but it terrified me because I only had one book to my name, one which had taken me many years to write. I wasn’t sure if I had it in me to write a second book. What if I failed? What if it wasn’t any good? And of course the process was much different the second time around than it was with THE GOOD GIRL: a stay-at-home mom toiling away at her leisure on a novel just for fun.

The first thing I had to do was have a proposal for my second novel approved, and when my first proposal was rejected, I was struck again by a moment of fear: What happens if I can’t do this? I set a deadline for myself to come up with some unique storyline which would be both compelling and plausible, something which hadn’t been done before. I thought and I thought and I thought, willing ideas into my head, all of which I immediately rejected. I was losing hope quite quickly and was sure I had gotten myself in over my head when I signed that two-book contract. I pretty much had myself convinced I couldn’t do this when the idea came to me.

For this reason I like to think of PRETTY BABY’s inspiration as a moment of desperation. I’d just about given up hope when the image jumped into my head: homeless, young Willow with baby Ruby in her arms. There they were in my mind’s eye, waiting in the Chicago rain beside the train tracks. I scurried quickly to my computer and started writing what’s since become the opening scenes of the novel, and at that point I was off and running. I didn’t know who she was or what her story would turn out to be, but nonetheless, she was important.

It seems a far less glamorous example of inspiration than I imagine when I hear other authors talk about theirs. But no matter how the concept came to me, I’m so grateful it did. 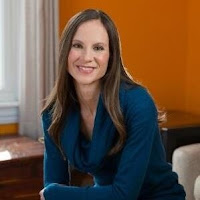 MARY KUBICA holds a Bachelor of Arts degree from Miami University in Oxford, Ohio, in History and American Literature. She lives outside of Chicago with her husband and two children and enjoys photography, gardening and caring for the animals at a local shelter. Her debut novel, The Good Girl, was an international bestseller.
Visit Mary online at www.marykubica.com, on Facebook at facebook.com/pages/Mary-Kubica-Author, and on Twitter at twitter.com/MaryKubica

Don't forget to follow the rest of the blog tour!!