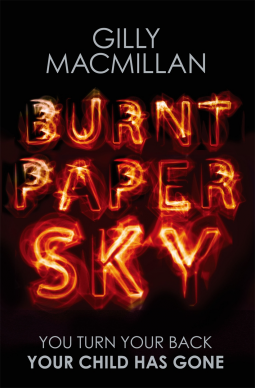 Burnt Paper Sky by Gilly MacMillan
Publisher: Piatkus
Release date: 27 August 2015
Rating: *****
Back cover blurb: Rachel Jenner turned her back for a moment. Now her eight-year-old son Ben is missing. But what really happened that fateful afternoon? Caught between her personal tragedy and a public who have turned against her, there is nobody left who Rachel can trust. But can the nation trust Rachel? The clock is ticking to find Ben alive. WHOSE SIDE ARE YOU ON?


Burnt Paper Sky is Gilly MacMillan's debut novel, but you would never believe it.

In fact, Burnt Paper Sky is one of those novels that I’m going to find really hard to review because it was so good. It’s one of those where you don’t want to risk giving away any plot, but equally want to urge everyone you know to read it.

Rachel Jenner is rebuilding her life after her ex-husband consultant paediatric surgeon, John Finch left, leaving her to bring up son Ben whilst he starts a new life with another woman.

Whilst out walking one Sunday afternoon, Ben asks if he can run ahead to the swing, the paths are familiar to them both and she knows it’s not far, so after a bit of deliberation Rachel agrees. It is a decision that she regrets as soon as she gets to the swing and realises that Ben is missing.

At first she thinks he may be hiding or chasing their dog, Skittle. But she soon realises that neither of them are anywhere to be found. Rachel immediately calls upon her sister, for support as well as informing her ex-husband and the Police.

DI Jim Clemo is assigned to the high profile case, determined to prove himself to his boss he pours his heart and soul into the case from the outset, knowing that the first 24 hours are crucial. A press conference is quickly organised for the family to appeal to the public to help find Ben, and this is where it all begins to fall apart for Rachel. Angry at whoever might have taken her son, she loses it in the press conference. Almost immediately people begin to turn against her.

Burnt Paper Sky showcases the reality of the technological world we live in. Rachel is ripped apart by online trolls and intense press speculation that she is somehow involved with her son’s disappearance. In reality she is torn apart by guilt that she allowed him to walk ahead, out of her sight. Her sister and her best friend rally around her and try to keep her off line and focused on trying to help the Police find her son.

As the investigation progresses there are people who become suspects, and information that comes to light that will leave you reeling, as it does to poor Rachel. Family secrets are uncovered that have been hidden for years and as Rachel reassesses the world around her, she begins to really fear for Ben's life.

Told alternately (and mainly retrospectively) from Rachel and Jim's points of view, Burnt Paper Sky is a novel that you won't want to miss this year.


Burnt Paper Sky is available from 27 August 2015.
You can pre-order it now from Amazon online and Piatkus Books.