Review: A game for all the family by Sophie Hannah 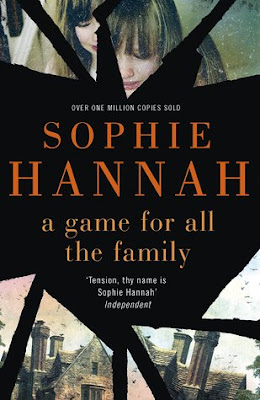 A game for all the family by Sophie Hannah
Publisher: Hodder & Stoughton
Release date: 13 August 2015
Rating: *****
Back cover blurb: Justine thought she knew who she was, until an anonymous caller seemed to know better... After fleeing London and a career that nearly destroyed her, Justine Merrison plans to spend her days doing as little as possible. But soon after the move, her daughter Ellen starts to seem strangely withdrawn. Checking Ellen's homework one day, Justine finds herself reading a chillingly articulate story about a series of sinister murders committed at the family's new house. Can Ellen really have made all this up, as she claims? Why would she invent something so grotesque, set it in her own home and name one of the characters after herself? When Justine discovers that Ellen has probably also invented her best friend at school, who appears not to be known to any of the teachers, Justine's alarm turns to panic. And then the phone calls start...

A game for all the family is only the second Sophie Hannah novel I've read, although I know she has written a lot more. I shall certainly be seeking out a few more of her novels after this.

There is so much I want to say about this novel, that I don't know where to begin. I fear that if I start talking about just how good it is, then I won't be able to shut up! It is a novel unlike any other I have read before.

A game for all the family is a novel that had me gripped from its first pages. When Justine Merrison and her family move from London to Devon, something happens on the way to Justine that sets the tone for the novel to come.

As they settle in to their new lives, Justine becomes increasingly concerned with her daughters behaviour, she seems very quiet and withdrawn, almost a different teenager from the one that travelled with the family from London.

And then Ellen begins writing a murder mystery story for School that makes Justine feel very uneasy, and you start to ask yourself these questions;

Why are the Merrison family leaving London? Why is Ellen writing a story about their new house? Why does Justine seem so on edge?

It is a puzzle of a novel, with its pieces slowly given to you by the author to put into place or discard as you see fit. There are times where absolutely nothing seems to make sense, and then there are moments of pure clarity.

Told from Justine's point of view, with Ellen's story as a secondary plot line, A game for all the family makes for compelling reading. It is a novel that you certainly won't forget in a hurry.


A game for all the family is available to buy now from Amazon online and all good shops.