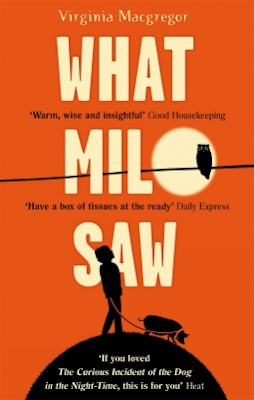 What Milo Saw by Virginia Macgregor
Publisher: Little Brown Group, UK
Release date: 18 August 2015
Rating: *****
Back cover blurb: What Milo Saw – Nine-year-old Milo suffers from retinitis pigmentosa: his eyes are slowly failing, and he will eventually go blind. But for now, he sees the world through a pin hole and notices things other people don't. When Milo's beloved 92-year-old gran succumbs to dementia and moves into a nursing home, Milo begins to notice things amiss at the home. The grown-ups won't listen when he tries to tell them something's wrong so with just Tripi, the nursing home's cook, and Hamlet, his pet pig, to help, Milo sets out on a mission to expose the nursing home and the sinister Nurse Thornhill.

What Milo Saw is potentially one of my favourite books so far this year. It is beautifully written and grips you without you even realising it from the very first page.

Nine year old Milo suffers from retinitis pigmentosa, his eye sight is severely limited and he sees the world through a pin hole, but he doesn't let this phase him.

In fact he seems to have a knack of seeing things that others can't. Perhaps because he needs to concentrate more on what he's looking at than the average person.

Milo lives with his Mum Sandy, his Great Gran Lou (although she is known as just Gran) and his pet micro pig ‘Hamlet’. Milo's father is no longer in the country following an affair that has left the family devastated.

Milo loves his gran to bits and doesn’t understand why she has to go and live at Forget Me Not nursing home, but as no say in the matter. When they first visit her there, he has a bad feeling about the place, and despite his limited sight Milo’s judgement is second to none.

Milo is adorable, but not in some sickly sweet kid kind of way, he is funny, caring, kind and very astute particularly in his judgement of Nurse Thornhill; the villain of the novel (alongside Milo’s dad and his tart). Smiley and pristine on the outside, Milo is certain that the Nurse is cruel to the residents and steals from them when their backs are turned.

Together with Tripi the care home’s ‘chef’ (an illegal immigrant who is just as worried about the nursing home residents) Milo works to expose Nurse Thornhill and the nursing home, in an effort to have his gran released and welcomed back in to the family home.

But even if he could have predicted them, I don't think even Milo would believe the events that follow. Without giving too much away, What Milo Saw is a very special book about a very special Nine year old boy. A must read.


What Milo Saw is released by Little Brown UK on 13 August 2015.
You can pre-order it now from Amazon online.