Review: All the Light We Cannot See by Anthony Doerr 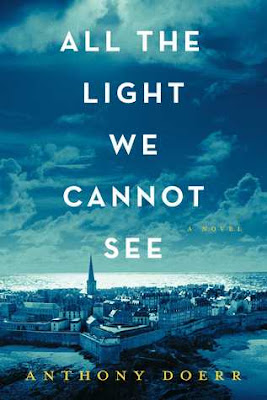 All the Light We Cannot See by Anthony Doerr
Publisher: 4th Estate
Release date: 8 May 2014
Rating:*** and a half

Back cover blurb: Marie Laure lives with her father in Paris within walking distance of the Museum of Natural History where he works as the master of the locks (there are thousands of locks in the museum). When she is six, she goes blind, and her father builds her a model of their neighborhood, every house, every manhole, so she can memorize it with her fingers and navigate the real streets with her feet and cane. When the Germans occupy Paris, father and daughter flee to Saint-Malo on the Brittany coast, where Marie-Laure’s agoraphobic great uncle lives in a tall, narrow house by the sea wall. In another world in Germany, an orphan boy, Werner, grows up with his younger sister, Jutta, both enchanted by a crude radio Werner finds. He becomes a master at building and fixing radios, a talent that wins him a place at an elite and brutal military academy and, ultimately, makes him a highly specialized tracker of the Resistance. Werner travels through the heart of Hitler Youth to the far-flung outskirts of Russia, and finally into Saint-Malo, where his path converges with Marie-Laure.

I wanted to love this novel, I really did (and I thought that I would) and whilst I enjoyed it, it didn’t move me as I thought it might. I can see though why it has won the awards and literary acclaim that it has, as it is so beautifully written. Perhaps it just wasn’t for me. I felt like I was constantly waiting for something else to happen and I thought that Marie-Laure LeBlanc and Werner Pfenning would meet much earlier than they actually did.

Our journey begins in 1944 with the shelling of Saint-Malo by the allies, to drive out the Nazi occupants. We switch back and forth both in time and between Marie Laure (the blind daughter of a museum locksmith) and Werner (a reluctant member of the Nazi party) from the outbreak of the Second World War until it’s end. Although this sounds confusing, it isn’t, the author does a good job of ensuring that the reader knows exactly who they are reading about, at exactly what time.

Although I adored both Marie-Laure and Werner, I think Werner was my favourite character, throughout his transformation from orphan child to reluctant soldier, he remains loyal to his sister and he has a good heart. I’m not sure at any point he truly understands the significance of the work he is doing until he meets Marie-Laure and understands that it is wrong that he wants to help her, but help her he must.

Strangely (as a book lover) I think All The Light We Cannot See would actually make an excellent movie, as I think it is a very visual novel that would translate well on to the big screen. Overall, I think there will be those that love this novel, and those like me, who sadly just didn’t ‘get it’.


All the Light We Cannot See is available to buy now from Amazon online and all good book shops.