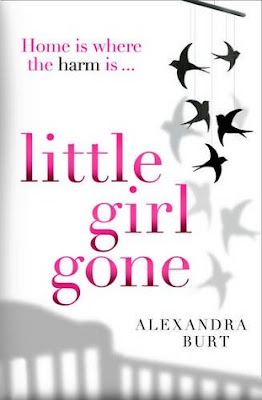 Little Girl Gone by Alexandra Burt
Publisher: Avon/Harper Collins
Release date: 24 September 2015
Rating: ****
Back cover blurb: A baby goes missing. But does her mother want her back? When Estelle’s baby daughter is taken from her cot, she doesn’t report her missing. Days later, Estelle is found in a wrecked car, with a wound to her head and no memory. Estelle knows she holds the key to what happened that night – but what she doesn’t know is whether she was responsible…

Estelle Paradise wakes up in hospital following a serious car accident to find police officers guarding her room. She was found in a ravine, just miles away from a town she can’t recall ever visiting with one of her ears missing and her fingerprints all over a gun she is sure doesn’t belong to her. But one thing is certain, her baby girl Mia is missing and Estelle has no idea where she is.

This novel has been constantly compared to Gone Girl building up to its release, but the only similarity I can see is the unreliability of our narrator, Estelle.

Estelle Paradise is a woman on the edge, a sufferer of post-partum psychosis that no one has diagnosed. She has been so convinced that there was something wrong with her colicky baby (other than colic) that she has neglected to look after herself. The accident is the final straw, husband Jack has reached the end of his tether with his wife and wastes no time in having her admitted to a psychiatric unit.

Estelle has amnesia as a result of the accident, but her Doctor at the psychiatric unit is a specialist in this area, he is adept at extracting information from people and doesn’t rush Estelle. Determined to discover the truth and help Estelle through her illness, he coaxes the information out of her slowly, but how much can he trust what she is telling him?

Without giving too much away I do think that the novels conclusion is fitting, for this is not a fast paced hard hitting thriller, more a slow burning emotional journey through time to an unlikely yet believable end.

Little Girl Gone is available from 24 September 2015.
You can pre-order it now from Amazon online and all good book shops.