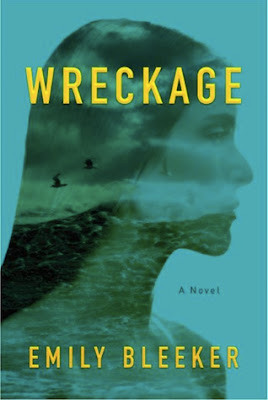 Wreckage by Emily Bleeker
Publisher: Lake Union Publishing
Release date: 1 March 2015
Rating: ***
Back cover blurb: Lillian Linden is a liar. On the surface, she looks like a brave survivor of a plane crash. But she’s been lying to her family, her friends, and the whole world since rescue helicopters scooped her and her fellow survivor, Dave Hall, off a deserted island in the South Pacific. Missing for almost two years, the castaways are thrust into the spotlight after their rescue, becoming media darlings overnight. But they can’t tell the real story—so they lie. The public is fascinated by the castaways’ saga, but Lillian and Dave must return to their lives and their spouses. Genevieve Randall—a hard-nosed journalist and host of a news program—isn’t buying it. She suspects Lillian’s and Dave’s explanations about the other crash survivors aren’t true. And now, Genevieve’s determined to get the real story, no matter how many lives it destroys. In this intriguing tale of survival, secrets, and redemption, two everyday people thrown together by tragedy must finally face the truth…even if it tears them apart.


So I love plane crash novels (and if you didn’t know that by now then you haven’t been reading my blog long enough!) and when I heard about Wreckage I just had to read it.

A small private aircraft crashing is somewhat different to a large passenger jet of the novels I am used to, and its usually about the after effects of the crash, rather than their actual fight for survival.

Lillian Linden and David Hall are the survivors of such a crash, after finding refuge on a deserted Island they must fight to survive against all the odds thrown at them. And survive they do, for Wreckage opens with Lillian about to go on camera and be interviewed for a television show.

What happens between Lillian and Dave on the island is a closely guarded secret that the pair have deliberately kept to protect their families. But when the interviews start and the television crews begin digging for more information about their time on the Island, both Lillian and Dave become fearful for their futures.

I’ve read quite a few scathing reviews about this novel, and whilst I didn’t particularly agree with the ending of the novel, I did feel that other parts were believable.

No one knows what they personally would do if they found themselves in a similar situation and there was an obvious attraction between Dave and Lillian from the moment that they first met. In fact the situation on the island, I have no trouble with, it’s their lives after that I found a struggle, and I think why I didn’t particularly enjoy the ending of the novel.

Overall Wreckage made for an interesting read, just maybe not the one I was anticipating.

Wreckage is available to buy now from Amazon online.