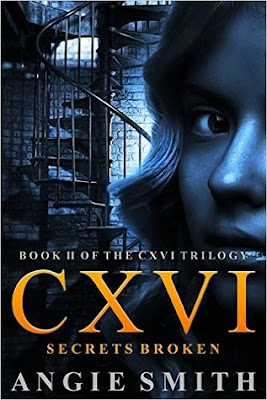 CXVI Secrets Broken by Angie Smith
Release date: 4 October 2015
Rating: ****
Back cover blurb: Book II in the CXVI trilogy is not intended as a stand-alone read and should follow Book I, CXVI - The Beginning of the End. The frantic search for Detective Sergeant Maria Barnes is on. She’s linked to the murder of the former Home Secretary and is desperate to prove her innocence, but she’s trapped. Her captor, Freddy Williams, a ruthless serial killer, holds all the cards; including the one she cannot allow him to reveal. Barnes is forced to adopt a dangerous bluff and double-bluff strategy, which ultimately involves the Secret Intelligence Service and her former boss, Detective Superintendent Greg Woods, combining forces. But who will survive? And who can you believe? And just what is the relationship between Barnes and Woods? Perhaps her nemesis Faulkner-Brown holds the answer, but will he be the one who brings this reluctant heroine crashing down? Hold tight for a fast paced, edge of your seat thriller. Captivating, unpredictable and shocking.

CXVI Secrets Broken is Angie Smith’s 2nd novel in her CXVI trilogy and is not intended to be read as a stand alone novel however I don’t want to say too much about the previous novel in case anyone is yet to read it. Its conclusion though is dramatic, and we pick up the story immediately with no gaps (excellent).

For me Secrets Broken is much more of a ‘thriller’ novel than the first, which I felt was more of a ‘crime’ novel, but that only heightens its excitement.

Maria Barnes finds herself the victim of a kidnapping at the hands of serial killer Freddy Williams, certain she can’t trust him she vows to contact Woods, but Williams knows exactly how Maria’s mind works and does everything in her power to ensure that she is on his side only.

Meanwhile DSI Greg Woods is unsure that he can still trust Maria after she seemingly just disappears from a major crime scene leaving him to pick up the pieces. As he begins himself to investigate her disappearance (off the record) he is forced to delve into Maria’s past, and makes some unsettling discoveries.

As Barnes and Woods each grow closer to finding the other they find themselves in more danger than they could have imagined. Will either of them make it out alive? Or will the intelligence services get away with yet another brutal crime.

I don’t want to give anything away, so you must read this novel yourself to find out the truth. You won’t be disappointed!

CXVI Secrets Broken is available from October 2015.
You can pre-order it now from Amazon online or via Angie's website.

Thank you to Angie who sent me an advanced electronic copy of this novel in exchange for an honest review.