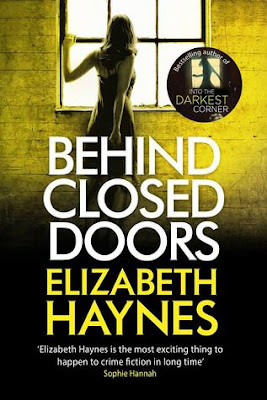 Behind Closed Doors by Elizabeth Haynes
Publisher: Little Brown Group UK
Release date: 8 October 2015
Rating: ****
Back cover blurb: 'To begin with, nothing was certain except her own terror . . .' Ten years ago, fourteen-year-old Scarlett Rainsford vanished without a trace during a family holiday to Greece. Not being able to find Scarlett was one of the biggest regrets of DCI Louisa Smith's career and when Scarlett is discovered back in her home town after all this time, Lou is determined to find out what happened to her and why she remained hidden for so long. Was she abducted or did she run away?As Lou and her team delve deeper into Scarlett's past, their investigation throws up more questions than it answers. But as they edge closer to the truth about what really went on behind closed doors, it is more sinister and disturbing than they had ever imagined.

Behind Closed Doors is another gem of a novel from Elizabeth Haynes. Gripping from the start, the second novel in Haynes' DI Louisa Smith series is an emotional roller coaster of a novel.

Scarlett Rainsford is fourteen years old when she disappears during a family holiday to Greece. Did she run away? Was she kidnapped or worse?

Hers is a case that still haunts police ten years later, until they stumble upon Scarlett, now Katie in a raid on a local brothel. Where has she been all these years? Has she lived the life she wanted, the one her parents are sure she ran away too? Or has she suffered, taken under duress as the police suspected?

Told retrospectively from Scarlett's point of view and present day from Louisa's, Behind Closed Doors is at times a difficult read as we learn of Scarlett's ordeal. The relationship between Scarlett and her family is examined closely, as are possible connections between a local gang and the brothel where Scarlett turned up.

Pieces of the puzzle are slowly given to us during each chapter of this novel until its last stages where we can finally begin to slot them into place.

What I really love about Haynes' novels is the detail we are given behind the criminal investigations, as a former Police intelligence analyst she really puts the reader at the heart of it all, Behind Closed Doors is no exception.

Behind Closed Doors is available from 8 October 2015.
You can pre-order it now from Amazon online and Little Brown.