Review: the Kind Worth Killing by Peter Swanson 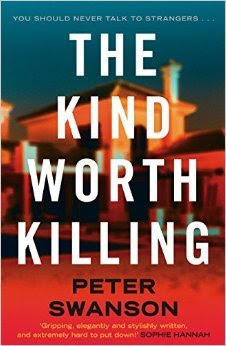 The Kind Worth Killing by Peter Swanson
Publisher: Faber and Faber
Release date: 3 September 2015
Rating: *****
Back cover blurb: ‘Hello there.’ I looked at the pale, freckled hand on the back of the empty bar seat next to me in the business class lounge of Heathrow airport, then up into the stranger’s face. ‘Do I know you?’


The Kind Worth Killing has been shortlisted for the CWA Ian Fleming Dagger Ward, you don't have to read very far into this beauty of a novel to understand why.

It's a novel that has been sitting on my ‘to be read’ list for a while, and as soon as I started it I could've literally kicked myself for not reading it sooner... Also any author who has had their work endorsed by the genius that is Nelson DeMille is surely worth a read.

The Kind Worth Killing opens with Ted Severson meeting Lily Kintner at London Heathrow airport both are waiting for a flight to Boston. From the outset Lily is charming, beautiful and manipulative; enticing details from Ted that you wouldn't normally impart to a stranger, yet revealing very little about herself. Once their flight is delayed, Ted finds himself opening up to Lily even more, and she is sympathetic to his plight.

Ted is a wealthy man whose wife is cheating on him with Brad Daggett the man who is helping them construct their dream home. Ted is angry, but unsure what he should do and jokingly hints as killing her.

Lily thinks that Miranda is after his money, and is the ‘kind worth killing’, she is blasé about the subject of murder; "Truthfully, I don't think murder is necessarily as bad as people make it out to be. Everyone dies. What difference does it make if a few bad apples get pushed along a little sooner than God intended? And your wife, for example, seems like the kind worth killing."

What follows is a series of flashbacks, For those who love a twist, there is a brilliant one about mid-way through this novel which I didn't see coming at all, and it really added to my enjoyment of the novel.

The characters in this novel at sociopaths at best, psychopaths at worst, I should hate them all - but there is something very intriguing about both Ted and Lily and I would love to see another novel with Lily Kintner as a character.

The Kind Worth Killing is a must read for crime/thriller fans, and comes highly recommended from me! I'm off now to scout out Peter Swanson's first novel, whilst kicking myself for missing it...

The Kind Worth Killing is available to buy now from Amazon online and all good book shops.

A huge thank you to Dead Good books for allowing me to receive a copy of this novel in exchange for an honest review.