Review: Alone with the Dead by James Nally 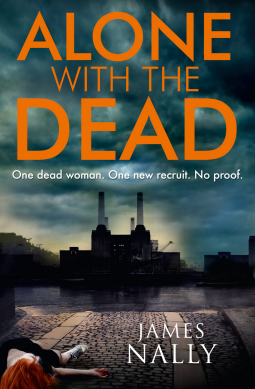 Back cover blurb: The first in an electrifying new British detective series starring PC Donal Casey. Meet PC Donal Lynch. Irish runaway. Insomniac. Functioning alcoholic. Donal is new to working the beat in London, trying his best to forget that night. After all, there aren’t many police
officers who can say they have a convicted murderer for an ex-girlfriend. So when a woman is murdered on his patch, Donal throws himself into the case. As the first person on the scene, Donal can’t forget the horrific sight that faced him – and he knows this case can’t go unsolved. But how do you solve a case with no lead suspect and no evidence? As his past catches up with him, Donal is forced to confront his demons and the girl he left behind. But what will crack first, the case or Donal? Chilling, brutal, addictive – if you like Tim Weaver and James Oswald, you will LOVE James Nally.


Alone with the Dead is James Nally's first novel, and (hopefully) the first (of a series) to feature PC Donal Lynch, a flawed character who I absolutely adored! Lynch hasn't had an easy life, he is young, yet he has been through a lot for his years. An insomniac who often turns to the bottle for comfort, with a journalist brother and an ex-girlfriend accused of murder, Lynch isn't ideal Police material. But he loves his job and has dreams of becoming a detective.

When the body of a young woman is discovered by her husband and his work colleague, Lynch is among the first on the scene. Knowing he will be called upon for little more than a witness statement, Lynch prepares to go home, have a drink and try and forget the case.

His brain has other ideas.

Lynch is visited at night by Marion the murder victim who is clearly trying to tell him something about her death. At first he dismisses it as a nightmare, but then he mentions it and his insomnia in passing to another crime victim whom he is trying to protect who refers him to a friend, a trainee psychiatrist, as she believes they are linked.

Lynch is reluctant to have his life picked apart by a stranger but is desperate to be a detective and believes that this may help him solve the many questions in has in his mind about Marion's death. As the murder remains unsolved, Lynch begins to voice some theories to his colleagues. He is noticed by the man who first persuaded him to join the force, D.S. Dan Shepard who agrees to make him acting DC.

Under pressure to solve the case, Lynch find himself distracted by the arrival of his ex-girlfriend from Ireland. Does he want her back, or is his career more important?

Donal Lynch has some tough decisions to make, but none so tough as who to charge for the murder of Marion Ryan.

An excellent first novel that genuinely had me surprised at its outcome. Alone with the Dead is one of my favourite crime novels this year.

Alone with the Dead is available to buy now from Amazon online and all good book shops.