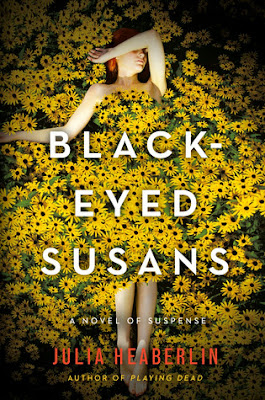 Black Eyed Susans by Julia Heaberlin
Publisher: Michael Joseph
Release date: 13 August 2015
Rating: ****
Back cover blurb: Seventeen-year-old Tessa, dubbed a 'Black-Eyed Susan' by the media, became famous for being the only victim to survive the vicious attack of a serial killer. Her testimony helped to put a dangerous criminal behind bars - or so she thought. Now, decades later the black-eyed susans planted outside Tessa's bedroom window seem to be a message from a killer who should be safely in prison. Haunted by fragmented memories of the night she was attacked and terrified for her own teenage daughter's safety, can Tessa uncover the truth about the killer before it's too late?


Black Eyed Susans are a type of flower that I had never heard of until I picked up this novel. A member of the Sunflower family, they are bright flowers that should bring happiness. To Tessa Cartwright they only bring despair.

Tessa (or Tessie as she was known then) is just Sixteen when she was left for dead in a field full of Black Eyed Susans. She is the only survivor of a serial killer and she cannot remember what happened to her. Some might argue that this is a blessing, but Tessie is still emotionally and physically scarred from her ordeal.

Black Eyed Susans is told from Tessie/Tessa's point of view over two differing time period; directly after the attack, and in the present day. Both have a common theme, Tessie/Tessa trying to remember exactly what happened to her. But there is one crucial different, back then Tessie was sure that the courts were pursuing the right man 'her monster' to put behind bars, years later she is terrified that the wrong man is about to face execution.

Now a single mother, Tessa is determined to protect herself and her daughter and sincerely hopes that the perpetrator is behind bars.

Through the work of psychiatrists (back then), lawyers and forensic investigators (present day) we are able to really get in to Tessie/Tessa's mind and piece together exactly what happened. Pivotal to the story line is Tessa's best friend Lydia whom she hasn't seen since they a had a blazing argument two days after 'her monster' went on trial.

As Tessa begins to wonder if Lydia and her families disappearance from her life has anything to do with the 'Black Eyed Susans', a piece of evidence comes to light that could change everything.

Black Eyed Susans is a little slow to get started, but it is definitely worth the wait, with a fabulously twisty ending I believe we will be seeing a lot more from Julia Heaberlin...


Black Eyed Susans is available to buy now from Amazon online and all good book shops.