Review: I Hope You Dance by Beth Moran 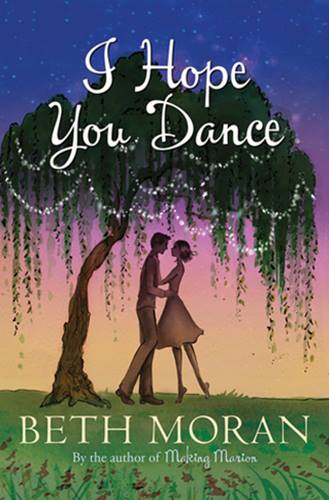 Back cover blurb: Ruth Henderson has moved back in with her parents – something she swore she would never do, especially not at the age of thirty-three. But in the face of the mountain of debt left by her late-partner and the fact that her teenage daughter, Maggie, is expressing her grief through acts of delinquency, there was really only one option. Returning to a house Ruth swore never to set foot in again is bad enough. Add to this an estranged father, whirlwind mother, and David – the boy next door who broke her heart – and it is little wonder Ruth can barely make it out of bed. But then, reunited with her old friend Lois, Ruth is persuaded to go along to a monthly girls’ night. Here she meets a bunch of incredible women and for the first time since leaving home at eighteen, Ruth begins to make some genuine friends. She also has her first ever date – with the charming Dr Carl Barker. However, after a disastrous dinner, and a fraught Maggie still struggling with her father’s death, Ruth promises her daughter she won’t go out with any other men. A promise she quickly regrets when David, the boy next door, asks her to dance…

I Hope You Dance isn't a novel that I would naturally have chosen to read, but when I was approached by Lion Hudson about a potential blog tour, I was intrigued to know more.

Ruth Henderson has moved back in with her parents, it wasn't something she was ever imagined she would do, particularly not at the age of thirty-three with a teenager daughter in tow. But then life hasn't been particularly kind to Ruth.

She thought she was happy living with Fraser and Maggie, although they never married, Ruth never wanted for anything. When Fraser is unexpectedly killed in a car crash, Ruth discovers that he's been living another life. Something much worse than an affair- he has left her a mountain of debt she had no idea existed.

After quitting her job due to a leery boss, Ruth realises she is left with nothing, except her precious daughter Maggie and reluctantly comes to the conclusion that if either of them are to even begin to move on with their lives then they most move 'home'.

After finding two part jobs and settling Maggie into her new school, Ruth reluctantly throws herself on to the dating scene, with a little help from a dashing local doctor. Quickly she realises that she isn't ready, but Carl is persistent and Maggie is flattered.

So what happens when the boy next door returns? David is the love of Ruth's life. But is he about to be brushed aside in favour of Carl or will Ruth realise that she doesn't want to date at all and is happy and content just to look after Maggie?

I Hope You Dance is full of truly brilliant characters and a wonderful twisty plot that will have certain aspects keeping you guessing.

A real gem of a novel.

I Hope You Dance is available to buy now from Amazon online and Lion Hudson.

I will be taking part in he official I Hope You Dance blog tour on Thursday 8 October.

Many thanks to Rhoda Hardie at Lion Hudson who sent me an advance proof of this novel in exchange for an honest review (and a spot on the official blog tour!)