Review: After Anna by Alex Lake 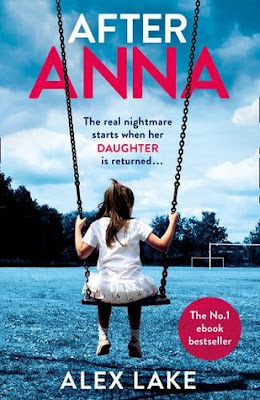 Back cover blurb: A girl is missing. Five years old, taken from outside her school. She has vanished, traceless. The police are at a loss; her parents are beyond grief. Their daughter is lost forever, perhaps dead, perhaps enslaved. But the biggest mystery is yet to come: one week after she was abducted, their daughter is returned. She has no memory of where she has been. And this, for her mother, is just the beginning of the nightmare...

After Anna is a novel that had me gripped from its opening paragraph. It’s not pleasant reading, for it explores the abduction of a Five year old girl from the abductor's point of view, but it certainly had me wanting more.

And so it continues; this novel really deserves the sentence 'unable to put down'.

Five year old Anna is taken from outside her school. Her mother Julia was late picking her up, and unable to call ahead. The school assume Anna has been collected, despite their strict policy.

Julia is devastated, and not only has her own guilt to deal with, but is immediately blamed by her estranged husband, Brian (he’s bitter because Julia initiated a divorce he didn't want) and his mother, Edna.

The Police are clueless, but little girls don't just disappear, and they’re certain she’ll return. After her first night missing, fears for Anna's safety deepen. The families history is delved into, but what the investigation will uncover, no one is certain.

When Anna returns virtually unharmed a week after her disappearance, her parents are overjoyed, but Julia can't help but wonder if this is this end? Now that Anna has returned safely, is there someone out there that wants something?

It doesn't take long to realise her fears are justified, and her worst nightmare has not yet begun...

I’ve no idea who the author is (the novel is written under a pseudonym) but whoever they are they know how to write an excellent novel.


After Anna is available from 19 November 2015.
You can pre-order it now from Amazon online and Harper Collins.

Thank you to lovereading who sent me an advanced copy of this novel in exchange for an honest review.