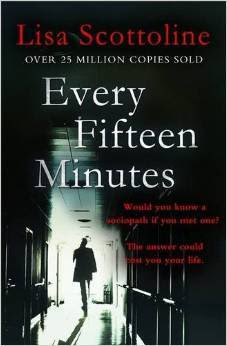 Every Fifteen Minutes by Lisa Scottoline
Publisher: Headline
Release date: 19 November 2015
Rating: *****
Back cover blurb: I plan everything. I set everyone in motion, and when the moment comes, I strike. Psychologist Dr Eric Parrish is unwittingly under threat. Recently separated from his wife, Eric is learning to become a single parent to his seven-year-old daughter, and life is far from straightforward. Now Eric has a new patient who could be a severe danger to others. And he must make a decision that will leave deadly consequences in its wake. The clock is ticking, and someone is hell bent on destroying Eric's practice, his family, his life. But how can you defend yourself against an enemy you don't know? And can you ever win a game you don't even know you are playing?


Every Fifteen Minutes is a scary emotional roller-coaster ride of a novel. And I think Lisa Scottoline's best to date.

Dr Eric Parrish is a renowned and well respected psychologist, recently separated from his wife, his personal life isn't perfect, but his employment almost certainly is. As 'Chief' of a busy psychiatry ward at his local hospital, people look up to and admire Parrish and the work he does.

When he gets involved in the case of a young man caring for his Grandmother who has terminal cancer, Parrish sees only the vulnerability of Max and the closeness of his relationship with his Grandmother, whilst those around him see Max as a potential threat - of what or to who no one seems sure.

When a girl of similar age to Max is murdered, the suspicion immediately falls on him. Particularly as it coincides with the night his Grandmother passes away. But Eric is so certain that Max didn't commit the crime, that he is determined to find out who did against the wishes of the police - who are beginning to think that Eric has manipulated Max, and that he himself is the murderer.

What follows is a gripping yet complex hunt for both Max (who goes missing immediately after his Grandmothers death) and the murderer, assuming of course as Eric does that they are not the same person..

Every Fifteen Minutes is told largely from Eric's point of view, with a chapter every know and then from an unidentified Sociopath. But are they out to get Max, Eric or someone else entirely?

Throughout Every Fifteen Minutes I had my suspicions of who the unidentified Sociopath might be, but then two separate incidents near the novel's end left me shocked, and make the novel even better in my opinion.

Every Fifteen Minutes is one of Scottoline's best, and should not be missed.

Every Fifteen Minutes is available from 19 November 2015.
You can pre-order it now from Amazon online and Headline.