Review: the Lost Art of Keeping Secrets by Eva Rice 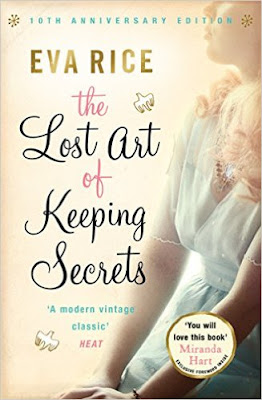 The Lost Art of Keeping Secrets by Eva Rice
Publisher: Headline Review
Release date: 1 June 2015 (10th Anniversary edition)
Rating: ****
Back cover blurb: Set in the 1950s, in an England still recovering from the Second World War, this is the enchanting story of Penelope Wallace and her eccentric family at the start of the rock'n'roll era. Penelope longs to be grown-up and fall in love, but various rather inconvenient things keep getting in the way. Like her mother, a stunning but petulant beauty widowed at a tragically young age, her younger brother Inigo, currently incapable of concentrating on anything that isn't Elvis Presley, a vast but crumbling ancestral home, a severe shortage of cash, and her best friend Charlotte's sardonic cousin Harry...
The Lost Art of Keeping Secrets is a novel of delightful characters, not all of hem likeable, but all of them believable.

Penelope Wallace is eighteen when she meets Charlotte Ferris, who introduces her to her cousin Harry and 'Aunt' Clare.

Penelope is instantly smitten with this family who seem every bit as eccentric as her own and for once isn't embarrassed to invite them to her crumbling ancestral home, the infamous Milton Magna.

Penelope's mother, the beautiful Talitha is keen to marry her daughter off to a rich eligible batchelor, but her and Charlotte are far more interested in American singer Johnnie Ray.

Still when Harry asks for Penelope's help in trying to win back his ex-girlfriend by making her jealous she is flattered and agrees after a little persuasion.

Penelope has the time of her life with opulent parties, new gowns and more male attention than she ever dared to dream of. But has Penelope gone too far, or is this just the beginning of her new life?

The Lost Art of Keeping Secrets captures the era perfectly.

Teenagers such as Inigo, Penelope and Charlotte were just coming into existence and they were obsessed with anything and everything to come from America, not least Johnnie Ray and Elvis Presley.
The Lost Art of Keeping Secrets is available to buy now from Amazon online and all good book shops.

A huge thank you to Bookbridgr who sent me a limited edition 10th Anniversary copy of this novel in exchange for an honest review.