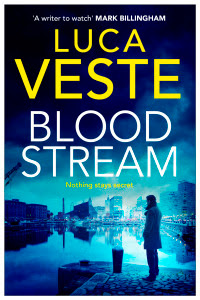 Bloodstream by Luca Veste
Publisher: Simon & Schuster
Release date: 22 October 2015
Rating: *****
Back cover blurb: A killer with a message to broadcast. Social Media stars Chloe Morrison and Joe Hooper seemed to have the perfect life. But someone took exception to it. Their violent deaths cause a media scrum to descend on Liverpool, with DI David Murphy and DS Laura Rossi assigned to the case. Three things soon become clear. This will not be the first murder. The media pressure will only intensify. And the enquiry leads straight to the heart of the police force.


Bloodstream is Luca Veste's third novel, his third in the DI David Murphy and DS Laura Rossi series, and in my opinion his best novel in the series so far.

It's opening, is brutal, Chloe Morrison watches her boyfriend Joe Hooper die at the hands of an unidentified killer before being murdered herself. The perpetrator we learn is all about exposing the secrets and lies that couples hide from and tell each other.

Although their lives played out on reality TV, away from the cameras Chloe and Joe we no different.

As Murphy and Rossi begin their investigation fears grow for a local missing girl, Amy Maguire. It seems unclear whether any potential suspect would have kidnapped her as they seem to be targeting couples, but the detectives fear for her life nonetheless.

A media frenzy soon surrounds the investigation, for Chloe and Joe were not the perpetrators first victims, and it seems unlikely that they will be his/her last.

As pressure mounts on the case, Murphy encourages Laura to spend some time away from work with her new boyfriend, whilst he remains and tries to think outside the box. What he discovers shocks him to the core and he begins to worry for his colleagues safety.

But should he be worrying for his own safety more?

Murphy and Rossi must get to the killer before he strikes again, that much is clear, but what if they are already too late?

Bloodstream is a fast-paced thriller which you will not be able to put down!

Bloodstream is available to buy now from Amazon online and all good book shops.