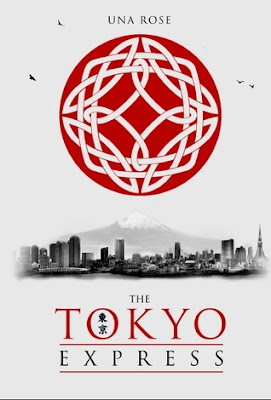 the Tokyo Express by Una Rose
Publisher: Estuary Publishing
Release date: 1 March 2013
Rating: ****
Back cover blurb: It is March 2011 and the tsunami has struck. As Conor desperately searches for Mimi, his Japanese wife, he realises how his dark and disturbing behaviour driver her to abandon him in Ireland and return to Japan. Over 60 years earlier, in war torn Tokyo, another international relationship is emerging from the rubble. Owen is falling in love with Mariko, a passionate and political local woman, who takes him on a journey. Then family and fate intervene leaving the couple destined to never be together. As prejudices continue to collide within two rapidly changing cultures, is Conor about to repeat his grandfather's mistakes?

Conor Flanaghan living in Tokyo, is devastated by the death of his father so returns with his Japanese wife Mimi to help with the family business that his father has left him, with the intention of returning to Japan.

But his Mother has other ideas.

She believes that Conor must take over the family business with Mimi and stay in Ireland for good. As much as Conor lives his family, his hometown harbours some painful memories for him. When tragedy strikes again soon after his fathers death Conor begins to lose sense of the good in his life and goes off the rails.

Mimi is faced with a dilemma.

Stay and try and help a man who so clearly doesn't want to be helped. Or return to her own family in Japan where she will once again be loved and cared for. With the influence of Conor's grandfather Owen, it becomes an easy decision to make.

Owen knew Japan in some of its darkest days. The aftermath of the Second World War. Working as a young Doctor he met a local girl Mariko.

When bad news from home arrived, Owen had to leave, but he has never forgotten the country that treated him so well and gave him so much.

When a massive earthquake hits Japan Conor comes to his senses and realises that Mimi is all he ever really wanted. But can he find her and bring her home? Or is it already to late?
The Tokyo Express is available to buy now from Amazon online.

A huge thank you to the author who sent me a copy of this novel in exchange for an honest review.