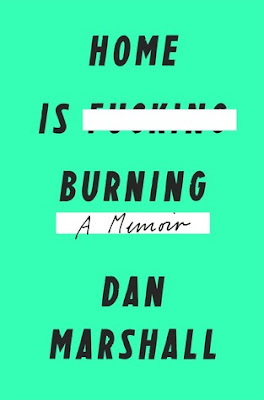 Home is Burning: A Memoir by Dan Marshall
Publisher: Hodder & Stoughton
Release date: 20 October 2015
Rating: *****
Back cover blurb: Hilarious, heart-wrenching and brilliantly written account of a twenty something returning home to his large, eccentric, foul mouthed family to care for his beloved, dying father. At twenty-five, Dan left his 'spoiled white asshole' life in Los Angeles to look after his dying parents in Salt Lake City, Utah. His mother, who had already been battling cancer on and off for close to 15 years, had taken a turn for the worse. His father, a devoted marathon runner and adored parent, had been diagnosed with motor neurone disease which was quickly eroding his body. Dan's four siblings were already home, caring for their parents and resenting Dan for not doing the same. Home Is Burning tells the story of Dan's year at home in Salt Lake City, as he reunites with his eclectic family -the only non-Mormon family of seven in the entire town- all of them trying their best to be there for the father who had always been there for them.


Dan Marshall is having the time of his life, he is Twenty-Five years old, has a good job, a decent degree and a cute and loving girlfriend, and he lives in L.A. Okay so his Mother has cancer, but she's been battling it for years. In her family's eyes, she's just 'Mom' - a fighter.
Everything is wonderful, until Dan's father is diagnosed with ALS. A fit and healthy marathon runner, it comes as a complete shock and turns the family's world upside down. At first none of them are prepared for the aggressive nature of the disease, and Dan is in denial about his fathers deteriorating health.
Then his Mom calls him and begs him to come home, and Dan is forced to face the reality of ALS along with his siblings.
This memoir is probably not for everyone. There is a lot of swearing and crass humour - even the cover has 'home is fucking burning' on it... But for me, the way the memoir is written goes some way to show how this family coped during some of their darkest days.
Their black humour and bad jokes helped them to cope with not one, but two parents dying of a terminal illness. And that's not all that this family have to deal with.
The Marshalls are an incredible bunch, and I thank Dan for writing this memoir which will hopefully raise some awareness for ALS*
*ALS - Amyotrophic Lateral Sclerosis is also known as Lou Gehrig's Disease but more commonly in the UK as Motor Neurone Disease.
Home is Burning is available to buy now from Amazon online and all good book shops.