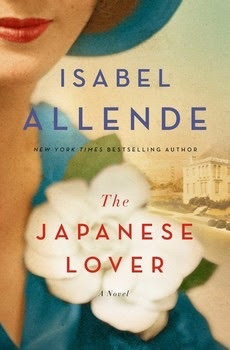 The Japanese Lover by Isabel Allende
Publisher: Scribner UK
Release date: 5 November 2015
Rating: **** and a half
Back cover blurb: From internationally bestselling author Isabel Allende comes an exquisitely crafted love story and multigenerational epic that sweeps from present-day San Francisco to Poland and the United States during WWII. In 1939, as Poland falls under the shadow of the Nazis and the world goes to war, young Alma Belasco's parents send her away to live in safety with an aunt and uncle in their opulent mansion in San Francisco. There she meets Ichimei Fukuda, the son of the family's Japanese gardener, and between them a tender love blossoms. Following Pearl Harbor, the two are cruelly pulled apart when Ichimei and his family - like thousands of Japanese Americans - are declared enemies by the US government and relocated to internment camps. Throughout their lifetimes, Alma and Ichimei reunite again and again, but theirs is a love they are forever forced to hide from the world. Decades later, Alma is nearing the end of her long and eventful life... contd.

Irina Bazili begins work at Lark House where she meets Alma Belasco and her Grandson Seth. Lark House is a nursing home that doesn't restrict its residents and Alma is in a privilege position as she has her own apartment and is able to pretty much come and go as she pleases.

When she asks Irina to work for her there are two things she doesn't bargain for. Her grandson falling in love, and her past being revisited. For Alma's behaviour makes both Seth and Irina suspicious. There are letters that she receives that she won't allow anyone else to look at, mysterious disappearances and weekends away that are never mentioned, and gardenias sent to Alma at regular intervals.

Meanwhile as Seth patiently pursues Irina, he realises that his Grandmother is not the only one hiding something. There must be some reason why she won't let him get close to her even though they get along and appear to be attracted to each other.

It takes faces from Alma and Irina's past to finally allow the beloved females in Seth's life to unburden themselves of their deepest secrets. He learns of love, betrayal, hurt and anger, and that is only the beginning.

I absolutely adored this novel, but was left a little confused by the ending. But maybe I was just hoping for something more- you will understand what I mean when you read it, but of course opinions may differ.

The Japanese Lover is a beautifully written novel that comes highly recommended from me.

The Japanese Lover is available from 5 November 2015.
You can pre-order it now from Amazon online.