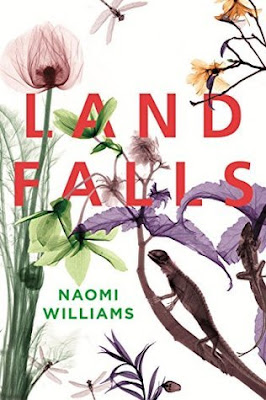 Landfalls by Naomi Williams
Publisher: Little Brown, UK
Release date: 22 October 2015
Rating: *** and a half
Back cover blurb: An epic voyage, undertaken with the grandest of ambitions. When Lapérouse leaves France in the Spring of 1785 with two ships under his command, he knows that he sails with the full backing of the French government. This is to be a voyage of scientific and geographical discovery - but every person on board has their own hopes, ambitions and dreams.  As the ships move across vast distances in their journey of nearly four years, the different characters step forward and invite us into their world. From the remote Alaskan bay where a dreadful tragedy unfolds, to the wild journey Barthélemy de Lessups undertakes from the far east of Russia to St Petersburg, the reader sees the emotional, physical and mental toll exacted by such an endeavour. Landfalls marks the launch of a brilliant new writer, who creates an unforgettable world through a web of voices and narratives.

Landfalls is Naomi Williams' debut, and I have a feeling we will be hearing a lot more from this particular author.

As any regular reader to my blog will know, I just adore historical fiction, and this novel, whilst a little different from my usual, was still very enjoyable.

The novel, is not all fiction - The Boussole and the Astrolabe were two ships that set sail from Brest in August 1785 upon the orders of Louis XVI with the aim of recording new lands, verifying existing charts and records and making new scientific discoveries.

But the novel itself is a fictionalised account of these ships voyages of discovery.

Told from the perspectives of several onboard both ships, this could easily have been a very confusing novel, but this debut novelist is clearly very talented and keeps the reader captivates throughout.

Clearly thoroughly researched, Landfalls is a wonderful tale of exploration, loyalty, friendship and love. It's a little slow to start, but worth the perseverance.

I look forward to seeing what this author has up her sleeve next!


Landfalls is available to buy now from Amazon online and all good book shops.,