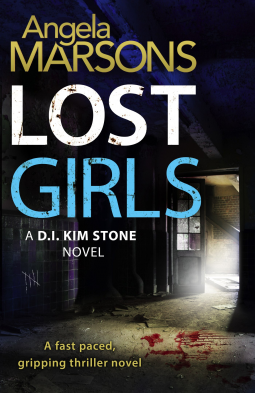 Lost Girls by Angela Marsons
Publisher: Bookouture
Release date: 6 November 2015
Rating: *****
Back cover blurb: Two girls go missing. Only one will return. The couple that offers the highest amount will see their daughter again. The losing couple will not. Make no mistake. One child will die. When nine-year-old best friends Charlie and Amy disappear, two families are plunged into a living nightmare. A text message confirms the unthinkable; that the girls are the victims of a terrifying kidnapping. And when a second text message pits the two families against each other for the life of their children, the clock starts ticking for D.I. Kim Stone and the squad. Seemingly outwitted at every turn, as they uncover a trail of bodies, Stone realises that these ruthless killers might be the most deadly she has ever faced. And that their chances of bringing the girls home alive, are getting smaller by the hour…  Untangling a dark web of secrets from the families’ past might hold the key to solving this case. But can Kim stay alive long enough to do so? Or will someone’s child pay the ultimate price?

Lost Girls is the 3rd novel in Angela Marsons's, D.I. Kim Stone series, but could easily be read as a stand alone novel. However these novels are so brilliantly gripping that I'd recommend the others in the series if you can get your hands on them!

When D.I. Kim Stone is called into the office on a Sunday afternoon, she wonders what she has done wrong, but it soon becomes apparent that her skill is needed. Two little girls are missing, snatched from the leisure centre where they were waiting for their parents to pick them up after swimming.

Charlie and Amy are inseparable, and their parents, Karen and Robert, and Elizabeth and Stephen are close friends as well as neighbours. In fact, Karen was due to be picking the girls up, until her car wouldn't start, and she received an anonymous text making it clear the girls had been kidnapped. Stone is assigned the case despite her reservations.

Quickly Stone realises there are similarities with an earlier case, but Emily Billingham was returned to her family whilst Suzie C was not. Stone is determined that the same won't happen this time, and that both girls will return safely to their families.

Families that are understandably distraught. When further text messages arrive suggesting that only one girl will live, the daughter of the highest bidder, the friends begin to turn against each other in a bid to save their daughters lives.

But what if the kidnappers are interested in more than money? Will these families ever see their daughters again? Stone are her team vow to bring the case to a satisfactory conclusion for all, but it won't be an easy ride.

Lost Girls is a very clever novel with complex characters, some likeable, some not so, but all very real. Lost Girls is yet another novel by Angela Marsons that comes with a five star review from me, and again, I cannot wait for the next in the series.

Lost Girls is available from 6 November 2015.
You can pre-order it now from Amazon online and Bookouture.