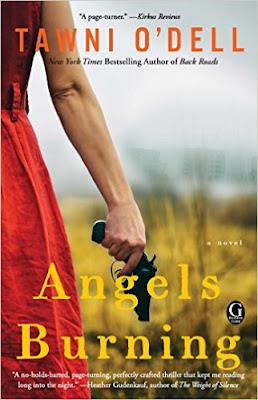 Angels Burning by Tawni O'Dell
Publisher: Gallery Books
Release date: 5 January 2016
Rating: *** and a half
Back cover blurb: From the New York Times bestselling author of the Oprah Book Club pick Back Roads comes this fast-paced literary thriller about a small town police chief who’s forced to dig into her own shadowy past as she investigates the murder of a teenage girl. On the surface, Chief Dove Carnahan is a true trailblazer who would do anything to protect the rural Pennsylvanian countryside where she has lived all fifty of her years. Traditional and proud of her blue-collar sensibilities, Dove is loved by her community. But beneath her badge lies a dark and self-destructive streak, fed by a secret she has kept since she was sixteen. When a girl is beaten to death, her body tossed down a fiery sinkhole in an abandoned coal town, Dove is faced with solving the worst crime of her law enforcement career. She identifies the girl as a daughter of the Truly family, a notoriously irascible dynasty of rednecks and petty criminals. Contd..


When a 16 year old girl is found murdered, her body broken and burned in a local sink hole, suspicion is immediately placed on the closest person to her, her boyfriend.

Camio Truly is from one of the most notorious families in the small Pensylvania town where Dove Carnahan is Police Chief.

Her murder is one of the most brutal she has ever seen. But she's not convinced after meeting Camio's boyfriend that he's the one she is after, and starts to look more closely at the dysfunctional Truly family.

Her officers and investigators around her are doing their best, but the crime is unusual in such a quiet community and all anyone can talk about it is the murder of Dove's own mother years before.

To coincide nicely with this, the man who was convicted for killing Dove's mother is released from jail, and determined to cause trouble for Dove and her sister and prove that he is innocent.

Dove is interested in one thing only, and that is to bring Camio Truly's murderer to justice. Everything else can wait.

But some people have other ideas....

Angels Burning is a great novel that is full of little surprises and the second novel by Tawni O'Dell that I've enjoyed - I look forward to the next.

Angels Burning is available from 5 January 2016.
You can pre-order it now from Amazon online and Simon & Schuster