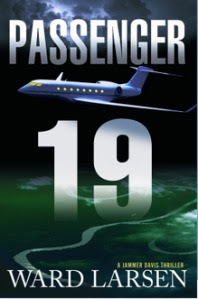 Passenger 19 by Ward Larsen
Publisher: Oceanview Publishing
Release date: 5 January 2016
Rating: ****
Back cover blurb: Jammer Davis has spent most of his life investigating aircraft accidents. When a small regional jet disappears over the jungles of Colombia, it is a tragedy like dozens of others he has seen…but for one terrible detail—his young daughter, who was enroute to a semester abroad in South America, is listed on the passenger manifest. A distraught Davis rushes to Bogotá and bulls his way into the inquiry. When the wreckage is located, it becomes clear the crash was unsurvivable. As the investigation gains momentum, the facts go astray. Two pilots had been shot before the crash, along with one passenger. The possibility of a hijacking looms large as the search begins to focus on two passengers who boarded the plane, yet their remains cannot be found. Davis uncovers an even more sinister plot behind the entire disaster—one that goes to the highest levels of the United States government. But how could it possibly involve his daughter?

Passenger 19 is the first novel by Ward Larsen that I have had the pleasure of reading. The content and writing style reminded me a lot of one of my favourite authors, Nelson DeMille.

When Jammer Davis' discovers that his daughter was a passenger on a regional jet that is missing, presumed to have crashed over the jungles of Columbia his first thought is to get out there as soon as possible.

As an aircrash investigator he should have every right to be there at the heart of the investigation but with the possibility of a close family member being involved in the crash there is a moral dilemma.

As soon as he arrives he realises that this is no ordinary investigation. In the cockpit, both pilots are dead, but not from the injuries sustained during the plane crash. Both were shot some time before.

Two passengers remains are missing, including those of his daughter.

Could she still be alive?

And why are there two bullet holes in one of the seats near her?

Is this a highjacking gone wrong?

Or something more sinister?

What have they got to hide?

Are they the key to finding his daughter?

Passenger 19 is full of brilliantly frustrating questions and will keep you gripped until the end.
It's an excellent novel, and I look forward to reading more from this author.

Passenger 19 is available from 5 January 2016.
You can pre-order it now from Amazon online and Ward Larsen's website.