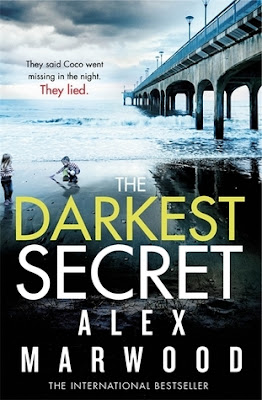 Rating: **** and a half stars
Back cover blurb: Apologies for the general email, but I desperately need your help. My goddaughter, Coco Jackson, disappeared from her family's holiday home in Bournemouth on the night of Sunday/Monday August 29/30th, the bank holiday weekend just gone. Coco is three years old. When identical twin Coco goes missing during a family celebration, there is a media frenzy. Her parents are rich and influential, as are the friends they were with at their holiday home by the sea. But what really happened to Coco? Over two intense weekends - the first when Coco goes missing and the second twelve years later at the funeral of her father - the darkest of secrets will gradually be revealed... Taut, emotive and utterly compelling, an unputdownable 'ripped from the headlines' novel that you will want to talk about with everyone you know.

Sean Jackson is a Multi-millionaire, with a group of friends that are very questionable indeed.

Already on his second wife when we meet him at the beginning of the novel, and on his fourth by its end, he could be a thoroughly unlikable character, but there is something about Sean that almost made me feel sorry for him.

His friends however are a different story entirely; spoilt, driven by money and entirely used to getting their own way, they are selfish, manipulative and pretty vile individuals.

As a group they are poisonous.

Sean's world is torn apart when one of his twin daughters, Coco goes missing during the night at his Fiftieth birthday celebrations, being held at a property he has been renovating in the wealthy Sandbanks area of Bouremouth.

More than a decade later Sean's body is found alone in a hotel and Sean's daughter Mila (or Camilla as she was formerly known) from his first marriage is persuaded into taking Ruby, Coco's surviving twin sister to his funeral.

Ruby like Mila has unanswered questions about the past, and as the novel spans back and forth between 'then' and 'now' we slowly begin to understand the shocking details of the night that Coco went missing.

The Darkest Secret is ultimately about the disappearance of Sean's twin daughter Coco, age three from Sandbanks.

In reality it is about so much more.

From its first pages which detail witness statements to its final pages with its shocking revelations, the Darkest Secret will have you shocked, disturbed and gripped.

the Darkest Secret is available from 7 January 2016.
You can pre-order it now from Amazon online and Little Brown UK.

Thank you to TBC on Facebook who provided me with a copy of this novel in exchange for a donation to a charity auction.