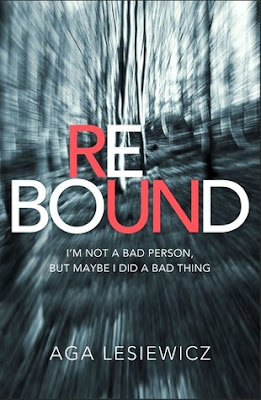 Rebound by Aga Lesiewicz
Publisher: Macmillan
Release date: 14 January 2016
Rating: *****
Back cover blurb: Anna Wright, a 30-something uber-successful media executive in London, loves her dog, Wispa, and she loves to run. Anna is recently single after ending her three-year relationship with doting James. A spontaneous tryst becomes the catalyst for a series of crimes on Anna’s running route. This illicit liaison becomes Anna’s obsession, ultimately plunging her into a subversive, oppressive reality.

Rebound is a gripping novel that explores a different side to the usual thriller novel - the guilt of the victim.

I was lucky enough to read this novel some time ago, but wanted to wait until nearer publication to post my review as this is sure to be one of the crime/thriller books of 2016.

Anna Wright is not your usual crime thriller protagonist, she is in danger, but she has in all reality, put herself in to the dire situation she finds herself in. Anna loves to run, and whilst she is running one morning her attention is caught by a handsome stranger.

A man so good looking that he looks like the belongs in a Dior advert. Anna christens him 'Dior man' in her head, and can't wait to see him the next time she is running.

But Anna and 'Dior Man' are not the only users of the Heath that they run upon, and when bad things begin to happen to women on the heath, Anna begins to question both her own sanity and safety. When her beloved dog Wispa goes missing and is bought back by an overly friendly neighbour, Anna thinks little of it, but could the people closest to her, be the ones that are the most dangerous.

Soon her neighbour, her ex-boyfriend and Dior Man are all under suspicion as the attacks on the heath intensify, Anna knows she needs to get away, so when she work beckons, she is only to happy to leave town for a while, but the London she returns to, is a very different one to the one that she left...

Rebound is a gem of a novel that will literally have you gripped.

Interestingly it leaves a few unanswered questions at the end, which I would usually hate, but in this case I felt it only added more to the novel.


Rebound is available from 14 January 2016
You can pre-order it now from Amazon online.

Thank you to The Book Club on Facebook who allowed me to read a copy of this novel as part of their read it forward book exchange campaign.