Review: A Fever of the Blood by Oscar De Muriel 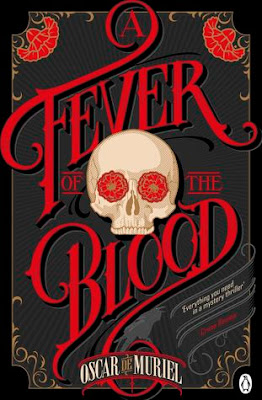 A Fever of the Blood by Oscar De Muriel
Publisher: Michael Joseph
Release date: 11 February 2016
Rating: *** and a half

Back cover blurb: New Year's Day, 1889. In Edinburgh's lunatic asylum, a patient escapes as a nurse lays dying. Leading the manhunt are legendary local Detective 'Nine-Nails' McGray and Londoner-in-exile Inspector Ian Frey. Before the murder, the suspect was heard in whispered conversation with a fellow patient - a girl who had been mute for years. What made her suddenly break her silence? And why won't she talk again? Could the rumours about black magic be more than superstition? McGray and Frey track a devious psychopath far beyond their jurisdiction, through the worst blizzard in living memory, into the shadow of Pendle Hill - home of the Lancashire witches - where unimaginable danger awaits...


A Fever of the Blood is the first of Oscar De Muriel's novels that I have had the pleasure of reading. Regular visitors to my blog will know that I love historical fiction, and this novel was no exception.

When a patient escapes from Edinburgh's lunatic asylum on New Year's Day, local detective 'Nine Nails' McGray and his colleague from London, Inspector Ian Frey are called to investigate. Not only because there is a lunatic on the loose, but also because there are fears that they have murdered to facilitate their escape.

When McGray and Frey arrive at the asylum in the dead of night, a young nurse at the asylum is found contorted in pain, only moments away from death in the room of the escaped patient. There is an uncertainty over the sanity of the patient, as the Doctor responsible for admissions lets the detectives into a unknown fact about the suspect.

Are they looking for a lunatic on the run?

Or an even more deadly murderer?

Only time will tell.

But what follows is a dark cat and mouse chase though Scotland into Lancashire. With the involvement of both the victims and the suspects family, McGray and Frey have their work cut out as they try to close the case once and for all.


A Fever of the Blood is available from 11 February 2016.
You can pre-order it now via Amazon online and Michael Joseph.