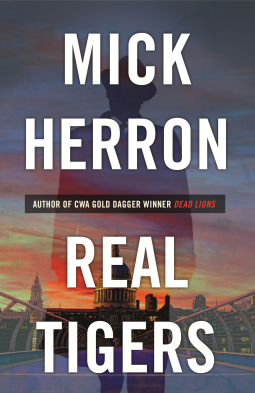 Back cover blurb: London's Slough House is where disgraced MI5 operatives are reassigned to spend the rest of their spy careers pushing paper. But when one of these 'slow horses' is kidnapped by a former soldier bent on revenge, the agents must breach the defenses of Regent's Park to steal valuable intel in exchange for their comrade's safety. The kidnapping is only the tip of the iceberg, however, as the agents uncover a larger web of intrigue that involves not only a group of private mercenaries but also the highest authorities in the Security Service. After years spent as the lowest on the totem pole, the slow horses suddenly find themselves caught in the midst of a conspiracy that threatens not only the future of Slough House, but of MI5 itself.


Real Tigers is the first of Mick Herron's novels that I have read, and is the third in his Slough House series. I do think that personally I might have enjoyed this novel more if I had read the others in the series first, but I don't think its a necessity.

I found this novel quite slow to get started and a little confusing at first, but once things get going it is very enjoyable-if not the kind of thriller I was initially anticipating!

Slough House (where the 'bad' agents; ex-alcoholics, gambling addicts etc - the very bottom of the pile, end up) v Regent''s Park, MI5 HQ (the Elite and the 'Good' agents).

When an agent from Slough House is kidnapped, it enables the rest of the agents there to actually act as agents and not be forced to follow the mundane daily chores that they are usually subject to.

Meanwhile (as always with spy novels) there is a political element for the big wigs at MI5 to deal with. The Home Secretary has a new agenda, and it's not a particularly pretty one for the intelligence services. The Home Secretary, at least to me, also appears to be a bit of a nut job!

In fact, there are quite a few characters in this novel who seem either thoroughly unlikable or unhinged in some way. But this just makes it more interesting. As the agents at Slough House work to rescue their kidnapped colleague, the novel becomes more action focused and violent before drawing to its climax.

Thank you to the publishers who granted my wish via netgalley in exchange for an honest review.