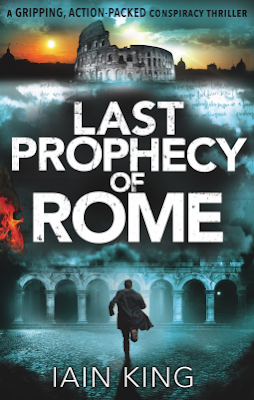 Last Prophecy of Rome by Iain King
Publisher: Bookouture
Release date: 28 January 2016
Rating: *** and a half
Back cover blurb: An ancient empire. A terrifying threat to the World’s Superpower. Only one man can stop it. ROME: Maverick military historian Myles Munro is on holiday with girlfriend and journalist Helen Bridle. He’s convinced a bomb is about to be detonated at the American Embassy. NEW YORK: A delivery van hurtling through Wall Street, blows up, showering the sky with a chilling message: America is about to be brought down like the Roman Empire. Juma, an African warlord, set free by the Arab Spring, plans to make it happen. When a US Senator is taken hostage, a chilling chain of events begins, and Myles finds himself caught in a race against time to stop Juma. But, he’s not prepared for the shocking truth that the woman he once loved, Juma’s wife, Placidia, has now become a terrorist.


I really enjoyed the first novel in the Myles Monro installment 'Secrets of the last Nazi' and have been looking forward to the second installment for a while now.

Last Prophecy of Rome is a prequel to the previous novel and sees Myles drawn into helping the US fight a terrorism plot from an individual intent on destroying the country if the US doesn't agree to review its immigration policy.

As before Myles is a reluctant hero, drawn into the situation almost entirely by accident. This time due to the US senator specifically asking for him by name.

It transpires that an individual that Myles studied with is intrinsically involved with the plot and will only co-operate with the US if Myles is involved.

When Myles first meets the US senator he is ready to refuse the invitation to help him out, but he isn't given the chance, and before he knows what is happening they are heading towards the middle of the danger and Myles is confronted with someone he never thought he'd see again.

The US is under threat by terrorists intent on using the fall of Rome as a template and Myles with his historical knowledge must figure out exactly which element of this are using before the US faces imminent danger.

Last Prophecy of Rome is a very relevant novel and makes you think about terrorism from a different point of view.

Recommended.
Last Prophecy of Rome is available now from Amazon online and Bookouture.